Are you interested in trying out the awesome Westland Sikorsky Sea King? Then this package will let you try out aviation royalty. The whole thing comes together in the most realistic fashion possible, giving you a truly authentic remake of the best helicopter out there for some. Read more...

The massive range of additions makes sure that you are flying the genuine edition, so that even the most novice of pilots can hop in and just start having some fun!

That being said, the helicopter has been realistically recreated so that every feature that is added in here fits with the real thing, giving you a true appreciation of just how much fun it can be to fly something like this in FSX.

In this package, you get access to a full range of excellent liveries. In fact, you get 20 unique designs included in total all of which are based on the real-life usage of this aircraft. Given that the Sea King is so well respected within aviation circles, it's no surprise to see that it's such a commonly used piece of hardware. In this package, then, you get access to various editions of the aircraft that include versions such as; 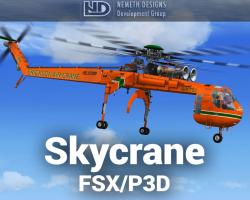