Users of both Microsoft Flight Simulator X (inc. Steam) Edition and Prepar3D can both experience the virtual version of the Cold War maritime patrol plane, the Lockheed P-2V Neptune, which was used in multiple secret Cold War surveillance missions during the height of the ideological conflict in the 1950s and 1960s. And these missions were undoubtedly dangerous, with the very real risk that the Soviet Air Force would launch attacks on these spy planes. Read more...

There are several models of the Lockheed Neptune, including the “Truculent Turtle” which flew non-stop from Perth, Australia to Columbus, Ohio – a distance of over 11,000 miles. The Neptune remained active until the mid-1970s when it was replaced with the P-3 Orion.

The realism is apparent throughout and is dripping in authenticity, with the virtual cockpit featuring animations and mousable gauges/switches. There are even animated crew escape hatches and bomb bay revealing torpedoes.

There are three realistic crew figures and an animated pilot’s head, and both the pilot’s and the copilot’s panels gauges are working correctly. This realism continues in the animated jet intake flaps, cowl flaps, and spoilers, as well as in the animations on the highly authentic undercarriage structure.

There is a togglable observer crew figure in the nose area, and a jet pod smoke trail effect on i-key, with the realism continuing with the authentic performance and checklist procedures. The sound pack is authentic also, and there are pop-up panels for GPS, radios, lights, and the starters/autopilot.

We should note that this 2020 release is a remastered version of the original 2006 release.

There have also been several significant improvements, including tested and ready to use VR. The texture of the seats have been remodeled and their overall texture improved, and the old “angular” window frames have been smoothed out.

There are also now togglable underwing aerial rockets (users should use the tailhook command) and togglable crew that even have occasional periods of animation. 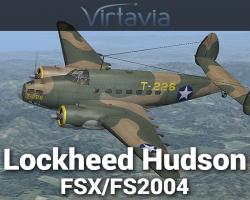