Lancaster B Mk.I for FSX/P3D

Developed by the expert vintage aircraft team at Aeroplane Heaven, this simulation of the Lancaster B Mk.I is the definitive re-creation of WWII’s most famous bomber. Compatible with Flight Simulator X, FSX: Steam edition and Prepar3D v2-4, the accuracy and attention to detail will bring the desktop pilot as close as it is possible to get on a PC to the experience of flying this legendary aircraft. The package includes six B Mk.I Lancasters, along with three ‘bonus’ Mk.III liveries that can be applied to the exterior. Read more...

Special care has been taken to reproduce the sound of four Merlins at full power. 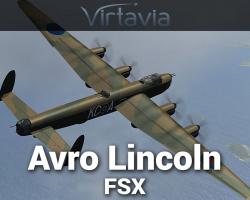