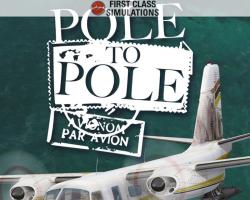 The epic journey begins! Fly in your Aero Commander 680, from frozen pole to frozen pole in a challenging odyssey that tests your flying skills to the limit. Experience the planet as you have never seen it before as you head south from the most desolate wilderness on Earth. Fly over vast unpopulated tracts of Canada. Relive the gold rush in the Yukon and fly from cosmopolitan Vancouver into the continental United States.

The route continues with a very special traversal of the USA showcasing some of the finest scenery and trickiest airport approaches in the world. Head out across the tropical paradise of the Caribbean and make landfall for a once in a lifetime opportunity to explore South America. The majesty of the Andes, the awe-inspiring Amazon basin and the carnival city of Rio De Janeiro all pass below the wings of your aircraft as you track ever southwards. Perhaps, the greatest adventure is yet to come, as you depart the coast of Chile and aim to cross the continent of Antarctica, following in the footsteps of the great explorers as you endeavour to conquer the ravages of Mother Nature and to reach the South Pole.

Each of the flight legs can be flown individually or consecutively and are comprehensively detailed, with a flight plan, pilot’s notes, full briefing and a guide to many of the wonders of the world that unfold before your eyes in this adventure of a lifetime!

The Aero Commander 680 is made up of two variants...