As one of the most impressive numbers within the wider Beechcraft King Air series, the C90B is a majorly popular aircraft. It's been a model that has since become a minor legend within aviation circles, revered for its impressive quality. Read more...

This was released in the 1990s and since then it has become one of the most impressive of its kind; a powerful four-bladed propeller-driven aircraft. It was a much quieter aircraft than its predecessor, which this add-on does a rather fine job of showing you!

If you are a fan of the C90B and would like to try it out in X-Plane 11, now is the chance. This Carenado creation helps to show off just how much fun one can have in the cockpit of something like the C90B. If you have never tried one out before, then this aircraft can offer you something different from predecessors and successors. 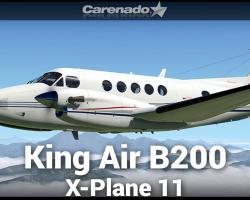