As the first aircraft of its kind, the twin-engine delta-winged Gloster Javelin at one stage served as a key part of the Royal Air Force, having been a key part of the 50s and 60s air force. Its T-tail made it stand out from the crowd and this was a significant part in its reputation becoming so popular. Read more...

With this model, you get to finally take on the Javelin in a way that does it some genuine justice - as far as the aircraft goes, you'll struggle to notice a difference between this and the real thing. With authentic flight specifications included throughout, you'll now finally be able to get into the cockpit of one of the 427 Javelins that were produced in the end, giving you the most effective way to finally try out an aircraft that is much loved but did not serve for as long as many people presumed that it would have.

If you wish to fly this aircraft, you can do now do so through the extensive usage of the various liveries included. With each package you are gaining access to a real-life equivalent of this aircraft that has taken to the skies in the past, making a truly perfect rendition of this aircraft come to life and ensure that it looks as truly outstanding as it can, and maximizing the attention to detail.

First and foremost let me say that the attention to the detail of the design of this model is brilliant. I've spent a lot of time researching the Javelin for my work in the past, and it was massively interesting to get to more or less fly inside one having spent a lot of time reviewing the aircraft from the wheels to the cockpit.

All of this realism and integrity to the authentic design was something I found really interesting in general and would recommend that anyone who wants to see a classy aircraft decides to check it out if they would like to see a first-class rendition of one of the most iconic aircraft of its time.

Each livery is timeless in their design and ensures you can easily enjoy a whole range of different models of this brilliant aircraft, whilst giving you all the aid that you need in getting used to the brilliant effects. The animations and features that roar into life from time to time are hugely impressive, and give you all the help that you could possibly need in giving your aircraft a real shove in the right direction.

I really was getting quite bored before using this so it was a lovely little shift in a new direction for me to try out something fresh and exciting, instead allowing me to get a bit of new perspective on something that I had spent researched before. I can say it's about as accurate as you'll get!

Very easy to fly aircraft in the pattern. Brakes on, power to 85%, release brakes, lift at 150 no flaps. Don't touch the throttle again. If you are a little hot on final, the air brake forgives your sins, your dad's and your grandpa's. Kiss the runway and release the airbrakes. 150 comes soon enough, and you're back in the pattern. Max juice it at sloppy 350 to 400 4 minutes to 30,000, immelman back to the airport and you'll exceed Doctor Mach, but not in level flight. Power on stall (@85%) at 10,000 happens at 100. Pitch forward recovers in 500 feet! This is a safe airplane. Transitioning to slow flight is easy with Javelins religious airbrake, but until you learn that trick, the Javelin is a petrifyingly perilous pest of the pattern that provokes profuse perspiration. Power management is difficult due to slow throttle response engines. Her pitch manners are challenging, and her roll is exceedingly quick. Her yaw axis is very stable, though. That stability, combined with her panel of two vors plus a glideslope and dme with a commendable HSI and radar altimeter make this an all weather aerobatic airplane. Buy it 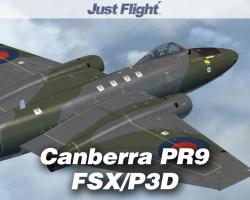