A320 Jetliner for FSX

This highly detailed add-on for Microsoft Flight Simulator X by Just Flight, accurately portrays the A320 as the proud, first member of the family, launched in 1984. The distinctive wing-tip fences of this short-to-medium ranged commercial passenger airliner, will make it stand out from the default collection. Moreover, customised flight dynamics help replicate the feel of this aircraft, including the reduction of aerodynamic drag that the wing-tips provide. The download package contains both CFM56 and V2500 engine sound sets. Read more...

All the animations you would expect to see are present, from engine fans to passenger and cargo doors, as well as extending landing lights and realistic thrust reverser animations. Combined with special effects, particularly the fire and sparks from the rear underbelly that occur when you over-rotate, all come together to deliver an impressive visual experience.

This add-on comes with a great set of bump maps to give a more realistic 3D feeling to the whopping 4 authentic, high-resolution livery sets, ranging from British Airways to United Airlines, giving you even more choice when flying the A320. All the repaints offer a high level of detail without compromising frame rates. The added specular maps create realistic lighting effects on the aircraft, so you can admire the hard work your GPU is doing when taking to the air using any of the multiple viewpoints, which includes a wing-view that allows you see the wings from the interior of the aircraft.

If a Virtual Cockpit is more your thing, Just Flight have built one with mouse-clickable operations, overhead, throttle quadrant and radio stack panels, so you can really sink into the experience of piloting this multi-national jetliner. The A320 family pioneered the use of digital fly-by-wire flight control systems, as well as side-stick controls, in a commercial aircraft, which Just Flight took into consideration with the custom-coded flight management guidance system. That, combined with the custom-coded Multi-purpose Control Display Unit (MCDU) that has been built to assist with functionality, demonstrates how much work has been put into this add-on. The MCDU features cockpit navigator pages, check-list pages and allows you to load and activate pre-made FSX flight plans, without having to leave the cockpit.

The A320 is Europe's answer to the American-built 737 and has been highly successful on short- to medium-length routes, with over 4,500 in worldwide service or on order since the aircraft first entered service in 1988.

Designed and built exclusively for Flight Simulator X the A320 Jetliner is part of the much acclaimed and user-friendly Just Flight F-Lite series.

The A320 Jetliner features a custom-coded MCDU) to assist you with functionality that many pilots find lacking on the default FSX A321 aircraft.

Four additional livery packs, each containing eight liveries, are available to purchase to expand the A320 Jetliner fleet.

The developer has modeled the A320-200 which is the only A320 variant available. There are 20 liveries included along with a paint kit. The liveries run the gamut of operators across the world, from Air Asia to Virgin America. There is something for everyone. The boxed version comes with a 68 page manual of pilots operating instructions. These consist of how to install the jet, a pretty comprehensive manual of the FMS, key commands, and a tutorial flight.

A walk around of the aircraft shows the time that Just Flight has poured into their A320. The aerodynamic lines of the baby 'bus look almost exactly like its real world counterpart. There are numerous animations, the usual ailerons, rudder, gear, speed brakes, and so on. - FlightSim 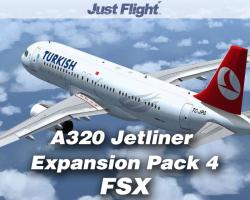 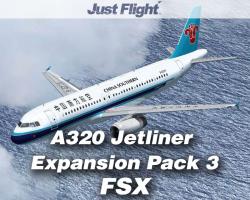 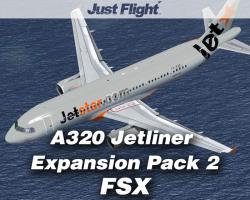 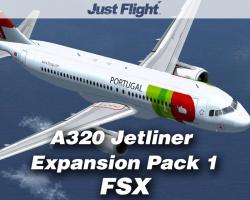 I bought this product and i loved it that much i just had to buy all the add-on liveries,another beatiful aircraft from " justflight " , the add-ons are at a very reasonable price on the justflight.com web-site,you have to keep your eyes peeled on the site as they have offers at reduced prices and you gain points to use towards your next purchases, use your points and it reduces the cost even further, if you use them wisely you will be even happier . I love justflight so much now i advise all my friends to pay the site a visit constantly for justflights latest products...check it out you`ll be glad you did... A318/A319 products also available..

Big and small problems with this. Flying under the included tutorial and following the instructions, the aircraft became completely unstable when climbing to the suggested cruse height of 34,000 at 280 knots. It pitched up rapidly causing it to stall. This was under autopilot as instructed. I tried the tutorial 3 times and this happened each time at the same point of the tutorial. (Crossing the English Channel). I have FSX (Steam version) and a very high powered computer. I also use the Saitek Flight yoke system. I will try reinstalling it and try again.

3D cockpit is far from par. Looks as if it was just thrown together from the A321 panel. Acft lands extremely heavy (900 to 1100 FPS). Myself and another purchased this at same time and he also has same results. Almost as if the config file is missing some entry lines regarding the Pitch" settings. Very bad product IMHO.

Good add-on, worthed to purchase. And nice to fly, friendly to land and take-off. 2D cockpit to be upgrade to be more photo-realistic

Sir, Can I have Druk air livery for my flight simulator of stream X ? I want to buy and install. Thank you .