The Ka-50 was developed in the 1990s after bitter losses in Afghanistan from ground fire. Unlike previous attack helicopters, the Ka-50 adopted a single man approach, lightweight, extensive armor, and considerable firepower, all of which lead to a very powerful and highly maneuverable battlefield surviving attack helicopter. Read more...

Like previous Kamov helicopters, the Ka-50 uses twin contra-rotating main rotors which negate the power-sucking tail rotor seen on other helicopters and make the aircraft safer to re-arm and re-fuel whilst still running in a combat quick turnaround situation.

The Ka-50 is fully acrobatic and able to perform loops, rolls, and the highly effective 'funnel' maneuver, also called circle-strafing. This requires the nose to be pointed down at the target and for the helicopter to fly sideways in a circular motion around the target, thus eliminating all areas of cover.

Primary weapons are the Vikhr laser-guided anti-tank missiles and the semi-fixed 30mm cannon on either side of the fuselage. Being semi-fixed allows greater rigidity and thus accuracy at range, the contra-rotating rotors with no lag from a tail rotor system allow rapid rotation in the yaw axis both left and right equally' a flight system aligned to the pilots head sights sees that the cannon/airframe can be traversed and lined up almost as quickly as the free-ranging turret on the AH-64 Apache.

I'm really someone who is not into helicopters but as soon as I seen the picture for the KA-50 I decided it may be best to put my prejudice to the side for a few hours and try out something a bit more unique looking. The immense detail on the helicopter itself made me want to try it out, not to mention the fact it came with firepower that looked like it could blow away a full continent! The design and the format of the aircraft did not let me down, then, as I turned up and got to enjoy a deeply unique and engaging form of fight that is hard to come across in many ways.

Having used the brilliant REALGAUGE tech in the past I was looking forward to getting a chance to use it again in this kind of environment as I typically used it on a chopper instead of anything else.

Everything, then, became really simple to use as the animations that were included moved as fluidly as the rest of the chopper whilst ensuring you could have total control over the whole thing. What I found most impressive about the animations was that it made it easier to fly the aircraft as you could see a genuine response to more or less everything that you asked the aircraft to do - this was really important to me as a bit of a newbie with choppers, helping me understand where I was going right - or wrong! 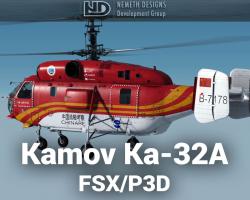