As an aircraft respected for all of the right reasons, the English Electric Lightning F6 often makes a fun aircraft for enthusiasts to take to the skies in. Read more...

This old-school fighter aircraft was capable of delivering a whopping climbing rate of 50,000ft per minute and was one of the highest performing aircraft of its era.

Now, you can try it out for yourself and see just how much of a challenge it is to handle something with the raw power and ferocity of the English Electric Lightning F6.

Part of what makes this aircraft really impressive is that it has so many small touches included. While all major features are included, small features on the model and within the cockpit contributes to a much richer, more harmonious experience overall.

Powered by a pair of exceptional Rolls Royce Avon engines, the F6 delivers a challenging flight that veterans will grow to love.

It's like being saddled to a rocket in many ways: the untamed speed and immense ferocity of the EE Lightning F6 is quite hard to believe at times.

The virtual cockpit has been created with immense detail and precision despite a paucity of useful information out there. this allows for a cockpit experience that feels very much like a Cold War-era aircraft, with low glare and the dark-gold style favored of the ear included.

Also, just about every switch, knob, button, and a lever is in the right location and is fully functional. This allows you to easily deploy a braking chute, easily activated via the keyboard or the cockpit.

Alongside other extras like a fully working radar scope and with seven historically accurate liveries, this is a faithful recreation of a very important aircraft that has, for many years, captured the imagination of military aviation enthusiasts.

Also, you get access to seven epic liveries, all designed to match up with real-life uses of the aircraft such as the Royal Air Force and Royal Saudi Air Force. These liveries include: 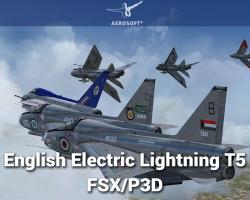 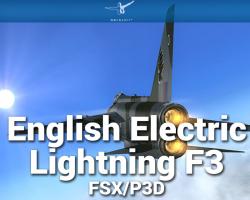