As one of the most reputed craft of its era, the Cessna 441 Conquest II has become a long-term party of aviation history. Thanks to this mod by FlySimWare, you can now take to the skies and enjoy something that really takes the authenticity and style of the original aircraft to new levels. This will do wonders for anyone who wishes to understand and enjoy the process of flying a unique aircraft such as this. Read more...

Developed in 1974 and finally in the skies for 1977, this aircraft went on to set a precedent for the eventual release of the massively successful Cessna 404.

With a tricycle landing gear systems and Garrett TPE331 turboprop powered engines, this aircraft has long been respected on the circuit. Even to this day, the aircraft is still being used by many countries for corporate usage, air charter operations and various other minor flight activities.

Thanks to the hard work and creative abilities of the FlySimWare team, you can get to enjoy and make use of the various services and formats that go with this system at its best. The entire program really is designed to give users a true taste of the real thing.

This also comes equipped with user manuals and tutorials to make it easier than ever to buy into the format of the real thing once and for all.

Like any good modification, this includes fresh variations of the real aircraft so that you can get more than one perspective of its flight capabilities. Some of these new variations include; 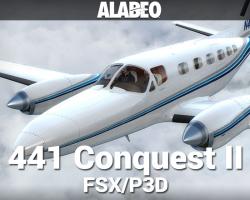 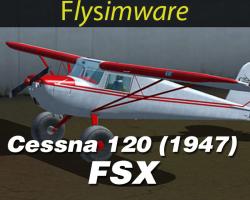 Over the years I've acquired many aircraft that I spent many more hours enjoying, at least a couple of those were created by Flysimware. I'm not saying that I have a bias to them as a team, just that I was well aware of them and the quality of their products before I came across this Cessna 441 Conquest II.

I wasn't necessarily in the market for a twin turboprop, but I will admit, I was intrigued by the fact that this is the first of its kind; I hadn't realized that up until this point, no one had accurately reproduced this sort of turboprop system due to limitations in the FSX software. I can't say for sure whether the same limitations exist within Prepar3D, as I don't own the software, although I've heard that they use very similar framework so I suppose it is feasible. Regardless, whatever intelligent work-around Flysimware came up with worked like a charm, and this thing flies like nothing else in my hangar.

I was pleased to see that Flysimware still put so much work into the model, considering how much under the hood stuff they had to do. The pictures above do a good job showcasing Conquest II, to some extent. You can get a general sense of the visual quality from the level of detail in the interior, the nice mood lighting on the cockpit and specular lights on the exterior, but there is so much more to it. From the carefully crafted 3D elements, the wide array of animations and the self-shadowing effects that add another level of depth to the interior - everything simply pulls together to make the aircraft feel, complete.

Maybe part of this feel, is created not only by the visual elements, but the various systems as well. There is so much here; you need only look at the list of features to get an understanding of how detailed it is. I found it incredibly easy to completely immerse myself into my flights, thanks to great visuals and really well tuned flight dynamics. I've had a lot of fun with it so far and I think I'll be flying this one for quite some time to come.

After the initial engine start up, the sound quality becomes terrible you can hardly hear the engines inside the cockpit and on the outside it's even quieter. The auto pilot heading and iOS GPS tracking in network fine but the altitude is not automatic from being sad, it is like the older Pipers where you have to wait till you get to an altitude and then press the button, which makes for some interesting approaches 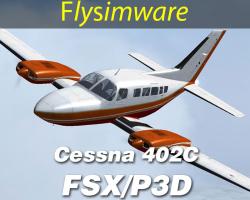