Looking for a simple and effect way to totally change the way that you look at traditional flight simulation? Then you have come to the right place. The B-17 Flying Fortress is one of the most renowned aircraft of its time, and was a key part of aviation emergence that came with the breakout of the Second World War. Read more...

The B-17 Flying Fortress

Whilst many amazing aircraft were released at this crucial time, it was very important that the aircraft that did hit the markets were genuinely going to help solidify and improve the entire world of aircraft and flight; with the help of the B-17 this was easily achieved. Today, thanks to the advancements made during the war, aviation is much further ahead than even the most optimistic people would have though.

Known as the “Flying Fortress” this mobile battle station was one of the most impressive models of its time, and its style totally changed the way that aircraft would typically be designed. Its massive size and bulky frame ensure that it carried a lot more firepower than your traditional aircraft, and helped to become a key part of the future moving forward –this remake of the B-17 gives you all of these awesome features in a style and manner that you can easily take advantage of and enjoy for years to come. Alongside the rather comical wartime classic “Memphis Belle” and other various promotional goods, this aircraft was made to give the same rigid power and uncompromising dominance that the B-17 carried into every single flight.

However, unlike many modern creations the B-17 was more than just hype and bluster – this actually brought a huge amount of changes and improvements to the way that aviation would be looked at and improved for years to come. Including the publicity officers, there could be up to 11 members of staff on any B-17, meaning that they required a full squad to manage and prepare effectively – this was one of the main reasons that it rose to prominence – no aircraft had ever attempted this before in the past.

Offering a hugely rugged structure that could take a beating and a large amount of functionality inside in terms of how the aircraft would move and fire, the B-!7 quickly established itself as one of the main vanguard for any attacks that would be carried out by Allied forces. The massive armor and strength of these flying fortresses meant that they had a higher record than any other aircraft during the war of taking damage and being able to make it back in one piece – in short, they were supremely well condition and were equipped for dealing with just about any problem.

However, its real power came from the immense stability of the design – it was responsive and simple to maneuver, providing the pilot with a level of functionality and response they probably weren’t expecting to receive from such a large, powerful piece of machinery.

Looking for a way to enjoy the world of flight simulation even more? Then you simply need to use the ACCU-SIM addition that comes with this package. ACCU-SIM is an A2A Simulations add-on that helps to completely revolutionize the way that FSX operates. Having been built around the idea that your flight simulation should be as accurate as it possibly can, and after many years of hard work and invention, this is the perfect package for anyone who feels like FSX simply does not challenge them enough – by adding in the power of reality, you can get the best flight simulation experience ever.

It’s been made nice and simple for everyone to be able to enjoy the unique quirks that make an aircraft unique – previously, even totally different aircraft could feel a little bit too similar when using a flight simulator. With the assistance of ACCU-SIM, though, you don’t have this problem any longer. It helps to bring the most authentic, exhilarating and enjoyable simulation of any aircraft out there to FSX by revamping what is in effect the entire engine. This allows you to fly the B-17 in a way that the real world could only have hoped for in the past.

All of those little additions that make the plane stick out in comparison to its contemporaries and opposition will be more noticeable than ever before – you’ll also really be able to feel the power of the engines kick into life as you shoot through the skies. This is vitally important as it’s these little additions that really make a flight simulation feel enjoyable – whilst the vanilla FSX software is very well made, it’s nowhere near as effective as it could be.

This is what ACCU-SIM looks to move upon, and ensures that clients are able to get the best job possible whenever they fist take off with their new aircraft.  The philosophy is strictly built on offering realism and authenticity at all times, regardless of whether you are taking off from a snowy landscape or you are trying to fly through the heart of a storm – ACCU-SIM helps to emulate this experience clearer than it has ever been done before. If you are looking for an easy way to try and get everything put in place, this might be what you’ve been looking for; it adds an element of risk to proceedings and can cause your aircraft to go through various issues during flight.

Engine overheating, extensive structural damage and even permanent flight issues such as hanging to one side can become an issue just through poor flight management – these are the kinds of situations and questions that are asked of pilots in the real world, and ensure that you will need to be at your very best to get the right kind of solution at the end. Improve your flight education and see just how well you are learning as time goes on with the help of ACCU-SIM, adding another layer of authenticity to the FSX engine piece-by-piece.

I have been wanting to add a quality B-17 to my virtual hanger. I did plenty of research before making my choice. This model is the best! The graphics are superb! It took me a little while to get used to the co-pilot talking in my ear. The effects are the best I have experienced in a payware plane. When the engine overheats and catches fire, you cut the throttle, feather the prop, and engage the fire extinguisher. And when the plane crashes or you bend a prop, you end up in the hanger where your crew chief shows you what you damaged and what needs to be fixed. Cool! The download was very easy, as was the install. I was up and flying about fifteen minutes after the download was completed. And after comparing various websites, you had the best price. Thanks!

One of the best addons relased for fs. systems are fully simulated, crew, life of engines, music and hot womans- all of that you have in a2a b17

This Aircraft is top's in my book, Well done. Look forward to more of this good work. Thank you, A2A 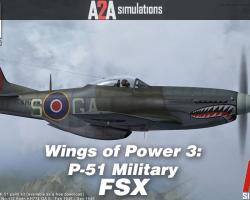