Not many aircraft with such destructive power will be held in such awe. The Rockwell B-1B Lancer, though, is a special aircraft. This supersonic heavy bomber has played a significant role in the US Air Force since it first too flight in 1974. While the B-1 first came to vision in the 1960s, it wasn’t until the early-to-mid 70s when it became a realistic aviation project.

It was to be used to improve over the speed of the B-58 Hustler whilst also replacing the old B-52 in terms of having even more space for firepower. This high speed and immense payload size made sure that the Lancer soon established itself as a major part of the USAF aviation firm. Indeed, as of 2018, it’s still held up as one of three heavy bombers used alongside the B-2 Spirit and B-52 Stratofortress.

Serving a key role in key war operations such as in Afghanistan, Iraq and in Kosovo, the Lancer has proven time and time again that it’s a military investment well worth making. That happy blend of destructive power and rapid speed can now be felt in super-close detail for anyone using the FSX: Steam Edition.

When you purchase this, you also get access to a new and improved 37-page PDF booklet. This comes in an easy to read PDF format, and should help you to learn everything that you need to know about the Lancer.

Users can also pick-up an add-on DLC package for the B-1B Lancer add-on from Virtavia. This new model will make sure you can get access to three fresh new model variants alongside an impressive trio of new models. You can pick this up and install it separately from this base model if you want more aesthetic choice when flying the Lancer. 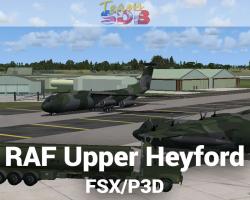