Alabeo, the designers of the R66 Turbine download for FSX & P3D, are a reputed design firm within the community who have created many high-end and accurate designs of some of the most beloved aircraft of all-time. Recognized for their key attention to detail and long research programs to get every detail absolutely spot on, Alabeo have produced add-ons for both aircraft & scenery for flight simulation software in abundance. Read more...

About The R66 Turbine

Designed by the reputable Robinson Helicopter, the R66 Turbine was first used in November 2007 and since then more than 500 models have been completed and are in use today. A large improvement over the already popular R44, the R66 provided improvements over speed, maneuverability and durability over its predecessor, and has established itself as an excellent training helicopter for pilots, and a useful light utility aircraft for a variety of different reasons.

The R66 Turbine was the very first turbine-powered aircraft in the Robinson ranks, created as a means of combating competition from the likes of Eurocopter on the market. It’s regularly used in police work, with a four-seater police equivalent created, equipped with a spotlight & a camera system. It’s usage in the public service industries is wide and varied, and also acts as a solid air cargo aircraft because of its speed and relative space in the back in comparison to other helicopters of this size.

In fact, it was the first Robinson aircraft to actually come with a cargo hold – with the ability to carry up to 140kg in weight. Since its inception it’s become one of the best common use helicopters of its kind, and because it only requires a crew of one to operate it makes perfect sense for trainee pilots to put to good use, as well.

When you download this representation of the Robin R66 Turbine, you will be receiving access to one of the most authentic representations of a light aircraft within flight simulation. With an accurate design on everything from the rotors to the landing skids, every tiny adjustment has been included and accurately designed to give owners or enthusiasts of the R66 as close to the real feeling as possible.

By utilizing a wide array of high-end modeling techniques that push the simulation engine to its very limits, Alabeo have produced a model which really captures every tiny detail about the R66 and brings it to the very forefront of the graphical capabilities of flight simulators. The materials on the plane shine as they would in real life, accurately reflecting the light at all times. This does its best to convey the accurate look & style of the R66 when you task to the skies, and it’s not just the small effects that are here to be seen, either. There is a huge amount of research and development time that has been used to faithfully represent both the interior & the exterior of the R66 as faithfully as possible.

From the tiny little scratches that appear on the cockpit window to the light that accurately reflects from the windscreen as the sun beats down on you, there is a huge amount of detail put into each and every aspect of the plane itself.

The rotor blades have also been re-created entirely, no longer just a generic animation that you see on most aircraft within the FSX series. Instead, as they start to pick up pace and generate the speed that you need to take off, you can literally see them start to bend under their own weight before straightening out, just as they would in real life.

Every detail has been taken into account to create a truly faithful depiction of one of the most versatile aircraft out there at the moment. The cockpit has also been taken care of by using first-hand representation from expert pilots, as well as image & video footage to create a genuine recreation of the cockpit you would use in real life. Every single button, lever & knob that you need to get the most out of your R66 is usable, and this makes it much easier to truly recreate the real-life experience.

The cockpit in an R66 is incredibly spacious, and this has been made to appear so when you fly one in the simulator – the instruments and gauges are placed on a smaller console in the middle of the cockpit, giving you unrivaled versatility in comparison with some bulkier aircraft that don’t provide you with the same range of features due to a lack of space within the cockpit itself.

With a true depiction of the realism you would expect from a flight simulator, this is the most accurate representation of the R66 you will find – it’s challenging to fly due to all the addition changes and additions, but if you want to really enjoy yourself up in the skies with a quick and unique aircraft, then this this is the one for you. 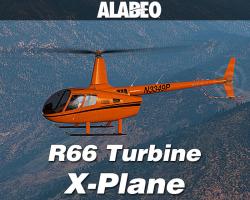 The young and talented group at Alabeo have released a new add-on for Microsoft's Flight Simulator X and Prepar3D, this time with a beautiful model of the Robinson R66 helicopter. This light utility and trainer helicopter was designed with a two-bladed main rotor measuring in at just over ten meters, a two-bladed tail rotor, skid landing gear and is made out of advanced composites such as aluminum alloy and chromoly steel.

Using advanced computer modeling techniques, the Alabeo team have created a visually enthralling model that rivals any other you could mention. Superb material shines and reflections demonstrate how much work has gone into the esthetic; a lot of digital texturing and intelligent mapping must go into creating such compelling visuals. Light even travels over the rotor blades in a realistic manner, and small environmental scratches can be seen on the cockpit when the light hits it just so.

A dynamic blade tension effect has the rotors fight against their own weight as they start spinning. So from an idle position, the rotors will bow slightly at the ends and as they start spinning, they will gradually straighten. Although it seems like a simple thing, I'm sure there is an awful lot that goes into creating a dynamic effect like this. Either way it adds a great deal of authenticity to the model.

The R66 has a unique design that is both simple and efficient. Inside the stylish frame is a spacious cockpit and a host of advanced electromechanical instruments. The cockpit is so spacious because all the instruments and gauges are housed in a small console in the middle of the cockpit. The absence of a traditional large panel opens up the space to allow for unrivaled visibility through the enormous cockpit windows.

With realistic behavior that matches that of the real thing, Alabeo's R66 can be marked as another grand success for them; once again they have achieved their goal of delivering products that encompass the joy, the challenge and the fun of flying. Plus, they consistently manage to do all of that while also providing some of the best looking machines available.

This is an excellent little bit of pay ware. It installs with no issues and the model rendering is excellent. The sound is good and is an accurate representation of the real heli. The flight characteristics are fair. Just like the real R66 there is no real "feedback" at center so hovering is takes some practice. Other than that, this is an excellent flying heli. Acceleration to cruise is very manageable and deccel from speed is very predictable. I recommend this for anyone who likes helis and is looking to hone their control touch skills.

I have yet to find the start button when trying to start up from a cold-&-dark status. It is also harder to fly than I antisipated, but helicopters are not easy beast to tame. I have enjoyed it so far and I am learning more about how to fly it.