This collection of early DC-8 models combines all the very latest modeling and texturing techniques with accurate flight dynamics to bring you an authentic simulation of this iconic aircraft! Read more...

The DC-8 was one of the first commercial jet airliners to enter service. The four-engine narrow-body airliner featured advanced aerodynamic and structural designs resulting in a very reliable, comfortable and efficient aircraft.

DC-8 Jetliner features the DC-8 Series 10 through to the Series 42. Every model is built over accurate factory standard plans and all feature the characteristic ‘double bubble’ fuselage, nose ‘nostrils’ and multi-pane cockpit glazing that make this aircraft so distinctive.

Many unique animations are built into each model, including retractable landing lights, opening pressure valve gate in the tail, rams and operating levers for the spoilers and flaps and,of course, the trim-adjustable flying horizontal/elevator tail assembly.

The landing gear is authentically modelled and animated with details such as springs and even detailed brake lines and wheel cylinders. Also included are the distinctive swivelling rear main undercarriage bogies which allowed the aircraft to make very tight turns when arriving at the terminals before the days of ‘drive in’ jetways.

Pre-flight flags, wheel chocks, a stewardess figure awaiting passengers at the rear door, and self-powered entry stairs all add to the authentic feel of this classic jetliner.

Cutting edge modelling and animation techniques are employed to show realistic wing flex and among the many special effects are the incredible smoke clouds and trails that these early DC-8 jets produced. You can even see reverse thrust smoke coming from the apertures in each engine when reverse thrust is applied.

The complex and authentic virtual cockpit has been built with authenticity in mind. Just the Engineer’s station alone contains hundreds of realistically operating switches and dials for monitoring the engine, hydraulic, electrical and fuel systems. Just about every switch, lever and knob is operational and functional. Flight instruments can be set up just like the real thing, with adjustment knobs and setting controls for preset speed, height course and heading.

Two very realistic (and noisy!) sound sets are included for the Pratt and Whitney JT range of engines fitted to the -10, -12, -21 and -32 models with their very distinctive ‘howling’ air start and for the Rolls-Royce Conway turbofans fitted to the -40 version.

The design and development of the DC-8 began in the early 1950s, but Douglas still believed that the future laid more with efficient turboprop aircraft than jet airliners. This was in contrast to the view held by their competitor Boeing, which was busy developing the 707.

The DC-8 project gathered pace as Douglas sought to win the USAF tanker contract for up to 800 aircraft, but they lost out to Boeing’s 707. Despite this setback the manufacturer continued to develop the DC-8 design and it was announced to the public in July 1955.

Initial orders were good, with the DC-8 attracting a similar number of orders to the 707. The first DC-8, a -10 Series variant, rolled out of the Douglas factory in April 1958 and flew for the first time in late May, shortly after the first 707 took to the skies.

Following its maiden flight the DC-8 went on to break world records for speed, altitude, distance and payload. The aircraft finally entered service for the first time with Delta Air Lines in September 1959. A Douglas DC-8 broke the sound barrier on 21 August 1960 in a controlled dive through 41,000 feet and reached a speed of Mach 1.012 (660 mph/1,062 km/h) which it maintained for 16 seconds. The purpose of the flight was to collect data on a new wing leading-edge design, and in doing so the DC-8 became the first civilian jet airliner to go supersonic.

The Series 10 was the first variant of the DC-8. It was developed for domestic service and was powered by four Pratt & Whitney JT3C-6 turbojets, each producing 13,500lbs of thrust.

The Series 12 was the first variant of the DC-8 to enter airline service. It was developed for domestic service and was powered by four Pratt & Whitney water-injected JT3C-6 engines, each producing 13,500lb of thrust.

The Series 20 introduced the more powerful Pratt & Whitney JT4A-3 turbojets which each produced 15,800lbs of thrust. This additional thrust allowed for a gross weight increase of over 10,000lb.

The Series 30 was an upgraded airframe for use on intercontinental routes. This was achieved through the combination of the JT4A turbojets, a 30% increase in fuel capacity and a strengthened landing gear.

The Series 40 was essentially a Series 30 fitted with 17,500lb Rolls-Royce Conway turbofan engines. These engines provided greater efficiency, and a reduction in engine noise emissions and smoke. Despite these benefits the Series 40 failed to sell in great numbers due to the reluctance of US airlines to purchase an airliner fitted with engines manufactured overseas and a desire to wait for the more advanced Pratt & Whitney JT3D turbofan which was due to be introduced.

Flight files for the project developed by real-world DC-8 engineer and tested by pilots with real-world DC-8 experience. Correct fuel systems and other engine maintenance routines are designed in.

A professionally produced stereo sound set is matched to the different engine types: the Pratt and Whitney JT range of engines of the -10, -20 and -30 with their very distinctive ‘howling’ air start, and another authentic set for the Rolls-Royce Conways
on the -40 version.

Special effects have been created to reproduce the incredible smoke trails these early DC-8 jets produced. Correct reverse thrust smoke has also been modelled and can be seen streaming from the apertures in each engine when reverse thrust is applied.

A comprehensive cockpit guide and flight tutorial is provided in illustrated PDF format.

A professional standard paint kit is provided for you to create your own liveries. 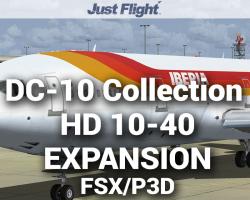 Long ranged 4 engine jet airliner with an annoying oscillating yaw below 160 knots on final. Steep and fast final approaches, 180 to 200, seem optimal. I recall my 19 year old CFI yelling at me, "You don't fly it with the trim." Fly this whale with the elevator trim. Out of trim causes an uncoordination between the yaw and pitch axis I've never seen before; she'll reluctantly turn, and loses altitude. Power management is easy with 4 easy to read round fuel flow gauges, but slow to respond engines will not help in a hurry. 12 is off, 6 o'clock is half power, and 11 is juicy. I see no reason not to juice it on take-off, lifting at 140, flaps up at 160. She seems to be safe from spin, with all engines running. Light load clean power on stall, 6 o'clock on the fuel flow gauge, 14,000 feet, stall warning at 110, absolute break happens at 100 with rock steady yaw and roll control. Pitch forward recovery happens at 140 indicated at 10,500 feet. 3,500 foot stall recovery. Bewarned the approach to landing stall if ye love life! Annoying, uncoordinated, reluctant, and slow to respond are the words I've used here to characterize the Douglas DC-8. It is said that divorced men like their ex-wives better than this airplane. Why buy this software? You are a pilot, and this 4 engine jet is so beautiful, and historic. 3 man flight crew, with one guy managing gas. When people see you fly this first generation passenger jet, they'll know who Sky King is. You. Buy it

I bought this miracle and was satisfied. Flying test flight from Los Angeles to San Francisco (KLAX-KSFO). All devices operate. Flies do not like a fighter. You feel the weight of the aircraft. By the way, there is even a shop. Short guys from Just Flight are great! 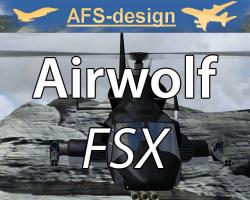 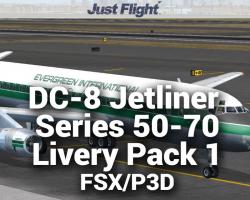