Although not the most commonly recognized or attributed aircraft of the previous era, the Yakovlev 52 Russian military aircraft is one worthy of the respect and acclaim of many. Read more...

Designed as a location that is a must follow for various reasons, this military trainer was used for various features that made sure it could be followed - and revered - without any problems by those who took part in the massive expansion of the Russian (at the time Soviet) designs.

It was thanks to the likes of the Yakovlev that so many people were able to get full control and appreciation for these stunning machines, making it much easier than ever to buy into the full philosophy and format of what they stood for.

The aircraft itself first took to the skies in 1976, and with this mod you can now trace back to the late 1970s when the aircraft was abruptly ended and try it out for yourself.

Originally thought up and then created as an acrobatic aircraft that would prefer Soviet pilots for the rigors and challenges of dogfighting, this aircraft was eventually used for both civilian and military training such was its popularity as an aircraft. However, the Yak 52 has since become an aircraft that was well loved by the West as much as the East.

Following the end of the Soviet Union, the Yak 52 made its way to the rest of the world and the largest majority of the 1,800 produced now reside in the US, UK and Australia. This operational aircraft is one that many pilots would have loved to have had the pleasure of using back in the day when they were still fresh designs, and now you can finally get access to this unique yet somewhat rare aircraft with all of its associated features - and limitations - included.

This mod brings together a wealth of new features to make sure that anyone flying in these models is going to be feeling as capable as possible along the way.

Indeed, this makes it easier than ever for the flights to occur and to ensure that the quality and depth of each flight can become far more consistent as you fly thanks to the additions of features such as;

However, this is more than just a simple list of models and textures! Indeed, this package concentrates on making sure that the performance levels can be up to the level needed, with features included such as;

One of the most impressive aspects of flying around in a YAK was just how much it reminded me of my childhood playing Command & Conquer: Red Alert! It immediately struck me as looking just like the old aircraft from back in the day, whilst giving me a total appreciation of what the Yak looks like and what it brought to the table back in the day.

Very sleek and cool looking, the whole aircraft is simple to fly around with and hugely enjoyable in terms of the way that it flies and the way that it holds up in even the most challenging of circumstances. I was shocked to hear that the aircraft was still in use in some parts of the world, but I can see why as they are just so incredibly reliable. The attention to detail the guys have put into this, though, is absolutely exceptional.

The entire package will ensure you are left with something that is easy to fly around with and much more enjoyable than your average aircraft in FSX. The added little details throughout like the different version with unique props and dual-pilot models gave me lots of variety which was a nice little touch that probably wasn't needed, either!

The overall attention to detail is brilliant with the crew and the gauges all sharp and easy to read, whilst giving me plenty of assistance in making sure I was flying right as the information provided with this makes it simple to fly. 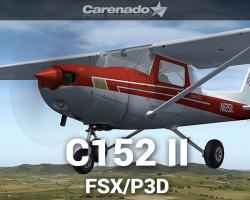