The USS Enterprise is a landmark aircraft carrier in modern history - not only did it herald the beginning of a new age of development and success for aircraft carriers the world over, but it also made it much easier for future aircraft carriers to develop. The reason is that the Enterprise was the first nuclear-powered carrier ever made, and it's the longest in the world to boot. With all of these facts and figures making it really stand out from the crowd, why would you not want to take to the skies with this magnificent piece of engineering? Read more...

Prepar3D v4: If you're looking for a P3Dv4 compatible version, check out the new version here.

However, the problem is that in the past you haven't had the capabilities within a simulator to make landings and take-offs as they are supposed to be. However, with the help of this brilliant USS Enterprise package, you can help yourself prepare something far more efficient and powerful than ever before. It takes all of the main features of the USS Enterprise and portrays them in the most authentic and professional light possible.

It was first commissioned in 1961, and today is the oldest vessel recently being used regularly by the US Navy. Otherwise known by its rather comical nickname "Big E" the USS Enterprise was finally set for decommissioning in 2013, after more than five decades of loyal and professional service. This package was first released in 2005 for the flight simulator known as Alphasim, but today it's been remade using the quality of learning of guys like Sylvain Parouty, re-modeled to fit P3D & FSX with precision and quality. Use updated graphics, modern textures and various other changes and additions to this famous old aircraft starting today. It was designed to make sure that the key features stand out as much as ever using the upgrades and changes to the FS system over the years. This lets you take control of this powerful monster of an aircraft and really dominate the skies with the best possible quality of design and style.

This amazing new change to the system allows you to have far more control over the carrier than you may have in previous aircraft simulators. Additionally, if you happen to work with Lockheed Martin then you may be happy to know that his been re-packed as an educational module for P3D, giving you, even more, control and versatility over the quality of the design. This takes the usual vanilla designs and improves upon them massively, giving you retro aircraft with modern features and quality to represent it perfectly.

This is one of the most authentic representations that we have of an aircraft carrier on SimShack. It helps us provide something that really looks the part, and makes it much easier for flight enthusiasts to take to the skies in something far more accommodating and bulky than your traditional aircraft. This makes learning and growing your experience when using the USS Enterprise far much easier.

I cant say if this software is good or bad because I never got to test it with my newly bought Vertical Reality Simulations, F/A-18E Superbug FSX fighting simulator. This, I tested just a little and it seems exellent. Anyhow, after I had downloaded and installed almost all recommended "tweaks" in the Uss Enterprice CVN-65 manual, my FSX reported in red text that some third-party software had done something, suggesting me not to continue. The F/A-18E Superbug also stopped working after that. Uninstalling suspected programs did not solve the problem.

I will try to restore restore my PC with a recent copy of my hard-drive. I guess Uss Enterprice CVN-65 is not to blame, it is probably exellent. Probably something happend when I installed some of thouse third-party software. I dont know. I need to do some restoring now.

I can't review this software yet as after down loading and installing, I could not get it to run for than a couple of minuets before the window would freeze, However I have now up graded my computer with a new quad core 3.5 GH2 processer which works OK. But before I down load the USS Enterprise again, I would like you to confirm that the game will run with FSX and not as a separate game from FSX ? As I would like to Position, Takeoff and Land , Any of the Aircraft from my FSX File.

I am thinking of buying this add-on for P3D v3.3. But, at present I cannot make the P3D default carrier show a wake when using AI Carriers so I am reluctant to buy a carrier which does not show a wake on my set up.

Can you please tell me what settings you use?

Using it in P3D V3.1 and is great..have no problems and runs very snooth, love the crew and the environment in the carriers.'Installation is simple and straight forward, the selection of the model is OK and gives variety, I use mainly the Darwin setup as I am in Australia and fly with Dino Cattaneo Boeing T45,

THere is no way that I can find that allows you to start and take off from the carrier. There are lots of "saved" flights that take you to a landing position. Great graphics.

Now I can see people try to land then fail!

As a former fighter pilot (F104) I can tell that this is a fantastic realisation, congratulation, signed Guy

GREAT Sim Ryan and Mike the best. Landing on that flight deck at night is Unbelievable. GET IT Greg

Hey looks great! Does it come on a disk Somehow I always lose the download Thanks 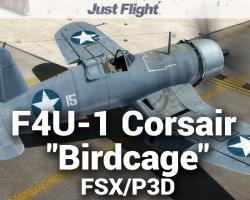