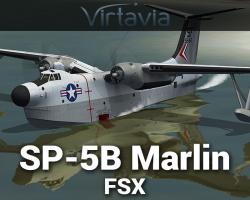 The name of this aircraft might not come as a surprise to those who have had the pleasure of setting foot inside the cockpit of the real thing, but the fact it sounds close to ‘Merlin’ should not be discounted. This is an aircraft that carries inspiration from the old PBM-3 Mariner, but was seen at the time of its release as a real magician of an aircraft that was capable of dealing with so many different tasks.

As part of the post-war aviation scene, it manages to carry a huge depth of detail as well as a new range of power its predecessors just could not hit. It came with a re-configured bow as a well as more powerful, refined engines. It served as a brilliant all-weather ASW vehicle and stayed in service for over a decade, having served various aviation firms in various roles from 1953 until 1967.

With this mod, you’ll finally get to test out that power and precision closer than you ever have before within a flight simulator.

In this package, you get access to six awesome 2048-pixel liveries all captured in pristine detail and design. This package, for example, includes liveries from;

i like to discover less known Aircraft moreover when they have very a specific not to say bizaar structure, good! works on P3D V4!