The RAF Wattisham Airfield was originally opened in 1939, in preparation for World War II. Its location proved valuable to the allied forces because it offered ease of access from major roadways, as well as terrain that proved necessary for the construction of runways. Read more...

The base, as it is depicted in this simulation, represents one of the capstone airbases from the Cold War era. The newest and most technologically impressive aircraft were introduced here, and during the Cold War, Wattisham quickly became one of the most important Air Bases for the Royal Air Force. While the Cold War remained without physical conflict, the Airbase at Wattisham continued improving its fleet of impressive aircraft, introducing a line of technolgically advanced Lightning aircraft.

The area surrounding the airfield is largely residential, but the airfield itself is located on a large tract of flat land. Though the base was never damaged severely enough to be shut down, it did undergo several major changes throughout its history, including many during the postwar years, all of which are shown in this simulation.

The layout of this simulation represents the improvements that were made to the airbase after the war, and showcase the constant striving from the English government for perfection in aeronautics.

The airbase, as displayed in this simulation, has a lengthy runway, with several key access points branching off. The airbase in the simulation also has a watch tower, which was demolished during 1992, but which appears in the simulation. Today, the base is home to a rescue helicopter station which serves much of the surrounding area.

Another important faction of this simulation is the layout of the lighting, which conforms to the actual lighting used at the airbase. The landscaping of the simulation provides the user with a representation of the base's appearance during the postwar years in which functionality was often more important that asthetics.

Located 2 miles NE of Bildeston in Suffolk RAF Wattisham was officially opened in March 1939 as a Bomber Command airfield, the station received Nos. 107 and 110 Squadrons from Harwell and Waddington respectively.

During the 1940-41 period, at least 30 asphalt pan hardstandings were put down on the west and north sides of the airfield. On June 4, 1942, Wattisham was listed for upgrading to Class A standard as a USAAF bomber base and work started on laying runways and in October it was also identified as the site of an air depot. However, a crisis in the airfield building programme saw work temporarily halted on the runways. In the event, this work was not restarted as the airfield was now not required for a bomber station, ultimately housing a USAAF fighter group, the 479th, equipped first with P-38s and then P-5ls, while the depot was utilised for fighter servicing, modification and repair.

Wattisham was handed back to the RAF on December 15, 1945. The station was in care and maintenance for a time until it was taken over by Fighter Command in October 1946, which based Meteor squadrons there for a few months. In April 1947, the station was again closed for flying while hard runways were completed and other building work undertaken. Fighter squadrons did not return until October 1950, Meteors giving way to Hunters in 1954 followed by Javelins, Lightnings and finally Phantoms. The RAF vacated the station in 1992 and after much additional building work the Army made Wattisham its major helicopter base with as many as seven squadrons in residence at any one time.

Wattisham is modelled here as it may have looked during the halcyon days of 1965 when 56 Sqn. and 111 Sqn. were in residence equipped with the English Electric Lightning F1A. AI Lightnings by David Hanvey are included.

Wattisham was also a V bomber dispersal field and Vulcans are on QRA at the runway end with Valiant tankers on one of the loop hardstandings.

The airfield is laid out based on research as it may have been in 1965 ( no Hardened Aircraft Shelters as they weren't built until 1982) and the technical site and married quarters are typical of the period but not "prototypical" of Wattisham.

The scenery consists of

Note: The AI are not "flyable" and along with the statics may not be compatible with DX10 preview.

A first class depiction of the airfield as it was although you're going to need a flyable Lightning to feel part of the scenario. I have Just Flight's F6 but there are several from Aerosoft of which the F3 would be historically more correct. Installation was fine but you need to read the instructions, particularly the 'left click inside the folder view' to add the scenery to the Library. Also set Airline Traffic Density to 100% to maximize local traffic. The airfield displays very nicely with Just Flight's VFR RS 3D scenery and looking from above compares well with the layout in the book Airfield Focus 3 Wattisham. On startup there is already an F1A in the circuit and if you dally you'll be put on 'Hold Short'. Get airborne on a 'scramble' and if you chase a contrail with aircraft labels (FS Options) set to display Model/Distance/height you can attempt a VISIDENT before returning to base I'm on FSX with Acceleration 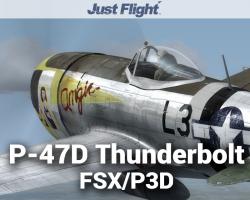