Used during the Second World War for use by No 14 (Pilots) Advanced Flying Unit of RAF Flying Training Command, this airfield was then taken over by RAF Coastal Command and officially became RAF Banff Strike Wing. Read more...

This reproduction, available for P3D, features a fully accurate layout of the airfield, although we should note that the infrastructure, while realistic, contains a little artistic license. There are authentic hangars and support buildings that further represent the time period excellently.

AI Hurricane and Lockheed Hudson are included, while static aircraft such as Beaufighters, Hudsons, Hurricanes, and Spitfires also feature. Perhaps adding that final touch of realism to this add-on is the operational and realistic night lighting, which fosters an authentic feel and atmosphere. 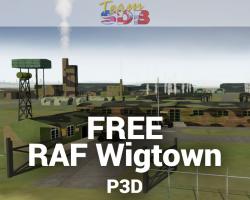