This highly detailed add-on for Microsoft Flight Simulator X and FS2004, brought to us by Just Flight, is a wonderful representation of the British multi-role combat aircraft, the De Havilland Mosquito. Nicknamed 'The Wooden Wonder', as it was made almost entirely from wood, the Mosquito was  incredibly fast and manoeuvrable, but maintained a heavy payload. This add-on has been put together as a lasting tribute to this great aircraft, and the effort has gone in to ensure that the characteristics of this aircraft are crystal clear to you as the Simmer. Read more...

Included in this package are three variants of this amazing aircraft, the B. Mk IV, the FB. Mk VI and the formidable FB. Mk XVIII 'Tsetse'. There are also a total of four detailed liveries depicting iconic squads, two of which are for the FB. Mk VI. On top of that, a full paint kit is included, so you wont feel limited by historically accurate liveries when you can make your own.

Each of the four models are coupled with lots of unique animations and accurate textures, as well as the distinctive sound of the the Rolls-Royce Merlin engines. So they look and sound like the real deal and will make a great addition to your Flight Sim collection. They are all finely detailed and have proper movement for parts such as flaps, rudder, radiator shutters and bomb doors. The bomber even has a working bomb-sight, arming switches and a bomb trigger, which goes alongside some of the more novel effects like the dropping of ordnance, smoke and the firing of the FB. Mk XVIII's under-slung flak gun. Painstaking detail can be seen in areas like the landing gear, even down to the brake lines and hydraulic actuators, and the emergency axe that hangs on the fuselage wall in the Tsetse.

For a fuller immersive experience, the cockpits are all equipped with the latest 'smooth' gauges and almost everything, from switches and buttons to control levers, can be operated with the mouse. No expense has been spared making sure everything is legitimate, down to the smallest details like the panel bolts, brackets and they even threw in the sliding windows.

Mosquito is fully licensed by the Royal Air Force and has been developed to the very highest standards by the vintage aircraft experts at Aeroplane Heaven as a lasting tribute to this amazing aircraft.

Built from wood and powered by two Rolls-Royce Merlins, the Mosquito was a formidable aircraft with the speed of a fighter, the manoeuvrability of a racer and the payload of a bomber.

There are three detailed Mosquito variants with four liveries included in this package.

Also included on the DVD-ROM are two upgrade packs that can be purchased and installed to add additional aircraft and liveries to this main package.

Each model is faithfully reproduced and contains amazingly detailed animated features. The cockpits are equipped with the latest 'smooth' gauges for more realism and just about every switch, button and control lever operates with the mouse - even the crew doors open with the lever! Everything is historically and technically authentic right down to the panel bolts and brackets.

In the bomber versions, the 'bomb room' is equipped with a working bomb sight, bomb-arming switches and bomb trigger. Even the emergency axe hangs on the fuselage wall!

The exterior models are finely detailed, with correct movement for the flaps, radiator shutters, rudder and elevator trim tabs, bomb doors and more. The landing gear is detailed down to the brake lines and hydraulic actuators.

In this package we have provided a good spread of aeroplanes with known histories. For the more adventurous, there is a full paint kit included so you can to finish your Mosquito variant in the scheme of your choice.

Many novel effects will be included, such as the dropping of ordnance, smoke effects and more. Please note that a dropped weapon will not 'destroy' any objects, as the Mosquito is hosted in Flight Simulator 2004 which does not have this function. 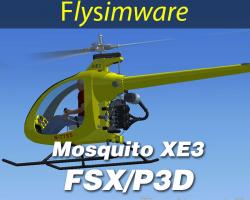 The best rendition of the "Mossie" there has ever been period I have tried so hard and for a very long time to pick fault with this aircraft and came up empty handed. If you want to fly "The Wooden Wonder" and in my view the R A F`s only true multi role combat aircraft then this is the version for you. Aircraft designers say if it looks right it will fly right! The best looking aircraft ever. I fly mostly in fs9 and fsx up high as pr16 or down, dirty and fast with the fb6 both handle fantastically and are the most accurate. Well done all at JUST FLIGHT and thank you so much.