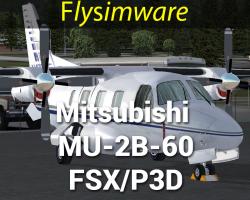 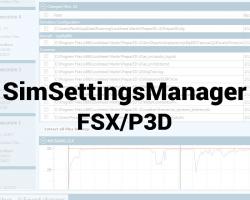 Drawing from their wealth of knowledge on this particular aircraft, Flysimware have created the definitive Mitsubishi MU-2B-60 that is arguably as close to the real thing as you can get. While made available for users of Microsoft's Flight Simulator X (including an easy installation into the Steam version of FSX) and Prepar3D, Flysimware's consideration to the end user goes even further. They have included multiple models specifically designed for pilots using a variety of other add-ons, including the GTN750 GPS and GNS 530.

As for the model itself, it looks great. Sporting HD textures in a handful of liveries and packaged with a few really nice features that work very well in boosting immersion and realism. World reflections, for instance, make the model feel tangible, like it's actually a part of the simulated environment. This is helped even further, by numerous custom effects like rain on the windshield, as well as the addition of specular lighting to the exterior of the aircraft, something that has become a standard for most high quality models.

Mechanically, it's pretty much flawless. Every little thing has been covered and seems as true to life as one could imagine, without having knowledge of the real thing, of course. Even going so far as to have an accurate pressurization system, animated pilots and the option to add luggage to the cargo hold.

The virtual cockpit shows of this models accuracy very well, regarding both the visuals and the performance. The gauges have been meticulously coded, with custom animations across the board, and pilots running DX10, will get to enjoy self shadowing across the console and throughout the interior. One feature, that seems to stand out more in the cockpit, is the sound set. Not only does this aircraft have a completely custom sound set, but these sounds even cover environmental and interior sounds. It's all well and good when the aircraft sounds real, but when you have sounds from the environment and other sources, things actually happening around you, it adds a lot to the overall realism and ultimately affects how much fun you have flying this MU-2B-60.

Awesome airplane. I have a few of the freeware MU-2s, and they are cool, but they are very lacking in detail and features. I wanted something with more usability and I was skeptical about purchasing this, but I'm glad I did. I have the Steam Version of FSX and this works fine.

The two biggest highlights of this DLC has got to be all of the functionality of the cockpit, and the SOUNDS! Bravo, bravo, bravo on the sounds for this. I especially love the ramp-up noise of the turboprops when you transition the condition levers from taxi to full. The insane attention to detail is great.

If you like cold starting, make sure you download the manual for this plane, or watch the info videos regarding startup. The start-up proceed, with regard to engaging and disengaging the prop locks, is tricky the first time.

I love the MU-2B, it's one of my absolute favorites to look at and to fly. It's a bit quirky, but in a good way. She lands a bit different than say the King Air, but it's a lot of fun.

This is a fantastic product, the attention to detail is second to none, then the sounds are all there and the flight dynamics are simply great. Now getting into the textures, gauges, engines, reflection, window tint where it is supposed to be and pretty much everything else is simply awesome, the proper landing gear compression when touching down hard and the list goes on and on.

The only thing that I miss is the 'cockpit view', yes the non virtual one where you can access some or the majority of the controls and such, it has taken me some time getting used to fly it without but then again the flight dynamics are so solid and so good that it is a breeze to fly even in marginal weather. It would be a welcome addition in the future if it happens.

For those of us that were lucky enough to fly the real thing back in the day, this is a sweet ride into memory lane, simply put 'priceless' !

Thank you much for such an awesome product. 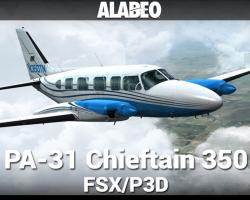 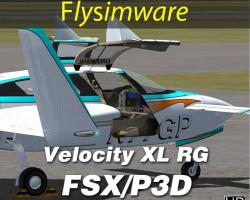