During the cold war, Americans were far superior then the Russians due to their F-15 Eagle, which is a twin-engine, all-weather tactical fighter designed to gain and maintain air superiority during aerial combat. To combat this threat Soviet Russia came up with the design of the Mikoyan MiG-29. Read more...

The specialty of this air fighter is its Klimov RD 33 turbofan engine with superior maneuverability, alterations were made while using the auxiliary air inlet on the upper fuselage for takeoff, landing and low-altitude flying, preventing ingestion of ground debris by closing of the main air inlet. The engines receive air through louvers which open automatically when intakes are closed.

The cockpit design has the basic left hand throttle controls and the conventional center stick. Emergency escapes can take place at lightning speed due to the ejector seat strategy. Upgraded versions of the MiG-29 include high-mounted bubble canopy and glass cockpits with modern liquid-crystal (LCD) multi-function displays.

The Sensors fitted on the MiG-29 include A Phazotron RLPK-29 radar fire contol system. This includes the N019 pulse doppler radar along with a Ts100.02-02 digital computer with a tracking range 70 km and 35 km corresponding to the front and rear aspect.

The Mig-29 is armed with a single GSH-30-1, which is a 30 mm cannon fitted to the port wing root which originally contained a 150 round magazine but now has been reduced to a 100 rounds, The later variants of the MiG-29 is capable of firing a cannon even if its carrying a centerline fuel tank(1,500 litre tank) which is used to carry out missions over long distance.

Provisions have been made for three pylon to be accommodated under each wing. The inboard pyloncan carry a 1,150 litre fuel tank along with medium range air missiles or unguided bombs/rockets. The newest version is equiped with laser-guided electro optical bombs and air to surface missiles.

The Mikoyan MiG-29 is a 3th generation jet fighter aircraft designed for an air superiority role in the Soviet Union. Developed in the 1970s by the Mikoyan design bureau, it entered service with the Soviet Air Force in 1983, and remains in use by the Russian Air Force as well as in many other nations. NATO’s reporting name for the MiG-29 is "Fulcrum", which was unofficially used by Soviet pilots in service. It was developed to counter new American fighters such as the F-16 Fighting Falcon, and the F-15 Eagle.

Technical data of the Mig-29 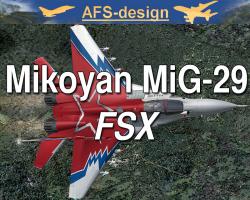