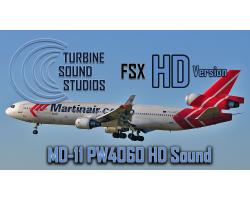 An incredibly challenging part of flight simulation is working out what the sounds you hear are – with this package by Turbine Sound Studios, though, this changes massively thanks to the HD version of the MD-11 PW4460 sound pack, covering this engine and giving you access to all the sound that you need.

As one of the most important parts of modern management of an aircraft, this engine sound pack will make it much easier for anyone who is using FSX or FS2004 to understand what the aircraft they are flying is trying to achieve.

This will not only improve flight confidence, but it will make it much easier to ascertain what is going on.