An expansion for Microsoft Flight simulator X that features the airport of El Hierro, and the many neighboring islands, is now available. This simulation, much like the other expansions available for Microsoft Flight Simulator is perfectly modeled and exhibits the natural beauty and excellence of the Canary Islands. Read more...

El Hierro or the "Meridian Island" is the smallest in terms of surface area and most southwestern island of the Canary Islands. The El Hierro airport is located on the most northeastern part of Valverde, a province and capital within El Hierro. The airport provides domestic flights to the other islands within the region. With the addition of the airport in 1972, communications between each of the islands greatly increased and allowed for cargo and resources to be shared amongst them. In addition, since the Canary Islands are famous for their tourism, the airport allows for much more human traffic, which elevates the status and economy of the island.

The quality of the simulation matches those of other expansions for the Microsoft Flight Simulator. Specific features include detailed airport terrain and scenery that mimic the ones from El Hierro, 3D models of the airplane signalizations and taxi lights, a new landclass and mesh terrain for further customization as well as a new collection of static objects, altered coastlines, and access to the Frontera, Puerto de LA Estaca, Valverde, and Roque de Bonanza provinces.

Inaugurated in 1972, the airport of El Hierro, located in the municipality of Valverde, has changed life on the island, improving communications with the rest of the archipelago and paving the way to a new type of tourism.

Air traffic is domestic, with the main origin/destination of flights being Tenerife Norte Airport and, to a lesser extent, the airports of Gran Canaria and La Palma. In 2007, the airport processed 184,762 passengers, 4,790 operations and 171 tonnes of cargo.

The first aeronautical event on the island of El Hierro occurred on 12 December 1955 when a helicopter flew to the island, in what was also the first search and rescue operation in the Canary Islands, to airlift a sick person off the island.

Studies for the localisation of an airport began in 1962. Due to the complicated relief of the island, the options were limited and in the end an area on the coast was chosen, known as Llano de los Cangrejos, situated in the northeast of the island, close to its capital, Valverde.

This scene represents a realistic and complete representation of the airport and his environment: landclass, reliefs, the roads, ports, the cities, this scenery is the perfect for an unforgettable trip under the shadow of the volcanoes. Destination for yours Spring and Summer flights... 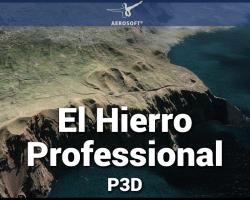 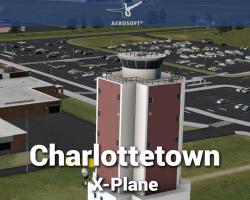