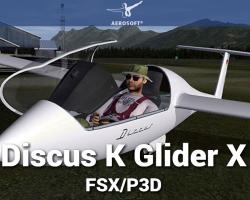 The Discus glider is a very impressive little German glider that, for 11 years (1984-1995) provided one of the best gliding experiences out there. A Standard Class glider, just over 800 were produced as a major part of the Discus range. Known for its distinctive swept-back style, it became quite a major hit in the market as something that broke completely free from the norm.

Indeed, the aircraft was used for victory in major racing tournaments, including the 1985, 1987 and 1989 World Gliding Championships. If you would like to feel a touch of that trophy-winning gliding quality, then, this take on the model is one for FSX and P3D v3-4 users.

While no longer among the best in the glider industry any longer, it’s still a very impressive glider machine that, in a simulation, can feel very fun to play around with. A high-performance glider, this comes with a 42-to-1 glide ratio. Easy to fly and with a simple range of options for both experienced and newbies to gliding to play around with, you should find this to be great fun regardless of your usual level of experience with gliders.

This particular version, the K Model, was one of the most popular of the Discus range. It was used for the first time in 1988, but many simulation pilots will likely have never enjoyed the pleasure that the Discus K Glider X provides. 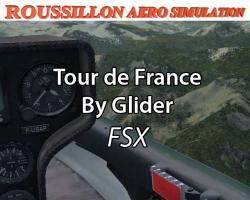