Flying a Boeing 787 aircraft is a lot of fun, but it’s made even more enjoyable with the right sounds. Part of what makes the 787 such a booming, loud aircraft is the use of Rolls Royce Trent 1000 engines. These create a loud and immersive noise whenever they are used, and often become a very popular choice for pilots flying commercial carriers. However, part of the problem with flying a 787 in FSX or P3D is the poor quality of audio feedback. Read more...

This aircraft engine was first released in 2004, and it was part of the Rolls Royce and General Electric partnership with Boeing. This was delivered as part of the 787, and soon became an outstanding replacement for the old engine. This helped to make sure that the Trent 1000 immediately became recognized as a major engine in the market.

This add-on adds over 75 new sounds, with each one making the whole aircraft experience much more immersive. Originally designed for the Qualitywings Boeing 787 for FSX, this should work with most Boeing 787 models. The engine itself is the perfect fit for the aircraft: a modern development which makes perfect sense for the demands of a new and improved Being model.

Known for its immense power and application, the Trent 1000 has gone through some serious changes over the years. From repairing the 2010 engine failure issues to solving issues with blade cracking, it’s a respected engine which has been improved and modified to a high standard.

Now, FSX and P3D users can hear that standard every time they fire up a Boeing 787. 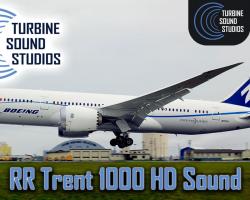