The Beechcraft Model 18 or Twin Beech, as it is better known, and is a 6 to 11 passenger aircraft. Twin engine, low wing, conventional-gear aircraft that was manufactured by Beech Aircraft Corporation of Wichita, Kansas. This Model saw military service during World War 2 in a number of version including the United States Army Air Force (USAAF) C-45 Expeditor, AT-7 Navigator, AT-11 Kansan; and for the United Sates Navy(USN), UC-45J Navigator and the SNB-1 Kansan. In addition to carrying passengers the aircraft uses have included aerial spraying, sterile insect release, fish seeding, dry ice cloud seeding, aerial firefighting, airborne mail pick up and drop, ambulance service, numerous movie productions, skydiving, freight, weapon-and drug-smuggling, engine test bed, skywriting and banner towing. Many are now in private hands. Become a private owner of this amazing historical aircraft for Microsoft Flight Simulator X and prepar3D. You will own a 1980's upgraded Beech 18D model and an original C-45 model. Developed with help of a mechanic who worked on this specific C-45 model you can expect high accuracy and a excellent flight dynamics.

You can also get a stunning expansion for this product which transforms it into a stunning Beechcraft AT-11 for military operations.  More information and purchase here.

I have several versions of this aircraft and the AT-11. It is one of the best aircraft flight Flysim both FSX and FS2004, for its great versatility and maneuverability both in air and on the ground (taxiing). To be a conventional aircraft, it has very good speed to go from one region to another. One of my favorites. 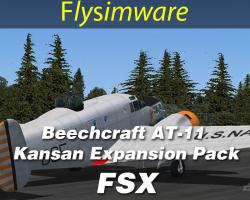