The Antarctic is one of the parts of the world that many of us know very little about, but still, find ourselves fascinated by! Read more...

If you are interested in learning more about what makes this unique part of the world so engaging and fun, then this mod is just what you need. Antarctica X is a revolutionary take on this wonderful part of the world, taking a new level of technological and graphical prowess. Rated by Aerosoft as one of their finest releases yet, this covers as much of the continent as FSX allows and also gets you as close to the Antarctica region as it can. The landscapes, freshly designed for specific use with this mod, will make a comprehensive change to the entire way that you feel about this part of the world.

Having overcome serious technical issues was making sure that it was geographically accurate given the number of countries included, this mod uses real pilots as their source. The respective pilots who got involved helped to create a range of combined databases that ensures the correct information was going to be used for the creation of this wonderful part of the world, taken from everywhere.

All of this information has been expertly compiled and perfected to ensure that it runs concurrently as one superb modification. The respective organizations involved with these mods have been taken from pilots who were happy to divulge what tends to be specific secrets. Without the help of aviation experts, though, Antarctica X would simply not be - this is a continent of extreme conditions and it's because of this that we can finally get a true take on this amazing part of the planet.

With customized land class data included in here that combines with Landsat satellite images, this does a fantastic job of perfecting the continent and making it look the best that it can. The end result? The finest Antarctica scenery package available. This allows for datasets that are being used by airlines and geographical institutes to explode into life, offering for the first time access to such incredible data and detail.

You also get the addition of the brilliant Twin Otter, the most commonly used aircraft in Antarctica! This lovely little feature will help you get even more out of your time spent here in this wonderful part of the world. For more information, keep on reading down below.

The first thing that most people look for in 'X' brand content is a detail and a level of precision within the look and feel of the map. This is no different here with the addition of some new high definition terrain mesh, alongside highly detailed aerial and satellite images combining together. Even the coastline has been changed and improved to ensure that it finally looks the way that it should, with huge floating blocks of ice added into their historical locations making sure that Antarctica X carries all the attributes and hallmarks of the real thing.

This also introduces a fantastic new range of research stations. Many of these stations are based in their identical location from real life and this makes Antarctica X look even more authentic. The following research stations have been included;

These incredibly detailed research stations tally well with the overall look and feel of the region, making it much easier for those traveling here to really buy into what is sitting in front of them as it changes entirely.

A major complaint about Antarctica X was the lack of places to fly to most of the time. However, an additional 47 new runways and skiiways are included which have been worked upon, remastered, and changed time & time again.

From helipads that range all over the continent for easy landings to the immense range of detail that goes into various parts of Antarctica X for landing, you'll find it far more active than its dormant original counterpart. This is further improved by the additional detail grades from the Russian hub and also the newest Chinese skiiway. These take on the authentic altitudes of the real location, too, with 13,000ft altitudes included just as the real airport manifests itself around.

It's this attention to detail and life that makes Antarctica X far easier to fly in than the dead, barren, and empty versions of the original.

Another excellent addition has been that of the icebreakers, with helipads running through them on scheduled routes. This is another nice touch that helps to sell the entire image and style of Antarctica X with absolute ease. Indeed, the three included icebreakers that are included are;

Antarctica X makes the use of major changes and improvements to the overall region, helping the whole place feel more welcoming than ever before. Many special sound effects are included with new effects and animations added in. This most certainly helps the whole thing come to life and feel better than ever, offering a simple and easily workable option for all those who spend too much time worrying about the lack of reality - it's the new major features that help to make Antarctica X feel like home.

This was taken on with the idea of using the professional help and assistance of a real group of Antarctica researchers and pilots. The end result is far more information and accuracy than would have been hoped for, with the professionals divulging everything that you would hope to know about this wonderful part of the planet.

Backed up by realism though is the ability to make specific changes when you want. Special tools are included which allow you to change crucial settings and even alter the season so that you can fly here whenever you like. It's these little commitments towards making the whole place more welcoming that ensures Antarctica X is going to look the part.

Flight plan files are included in this desire for realism, which helps the whole thing come to life and offer a refreshing take on the navigation that used to exist. Instead of being generic and dull, you can now get real-world flight plans which are taken from the way that real pilots would use to get here safely.

Not sure where to go or what to do? Then feel free to consult the new manual. This detailed manual gives you plenty of adjustments and changes which will help you fly here easily - they were written by a proper pilot, so you know that the information stored within is sound.

This latest update for Antarctica X makes it even better than before, introducing major changes such as; 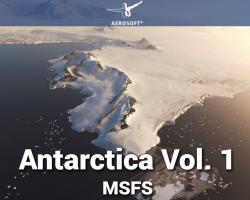 I'm sorry, but the price of scenery and aircraft models are getting out of hand over the last few years. I know a lot of work goes into these but You to keep the prices realistic. I'm not gonna pay almost $50.00 for scenery I can make with "Instant Scenery Maker" the SDK and scenery library's for the price $14.95 I paid for "Instant Scenery Maker". Not trying to be a jerk and I'm sure the scenery is good but I can't afford these prices for a flight simulator add on.

Hey Greg, funny you bought it though, along with "Instant Scenery Maker"

I will not buy "Instant scenery maker" and I am not being a jerk :)