As one of the most important airports in the world, Heathrow Airport brings in people from all across the world. The city of London, as one of the major metropolitan hubs of the civilized world, sees millions of visitors every year. Many of them choose to arrive via Heathrow. Read more...

For X-Plane 11 users, though, London-Heathrow can feel somewhat empty and hollow. This update looks to change that, adding the detail and the scale that should be present in a flagship airport.

This new add-on looks to include all five major terminals at Heathrow, as well as many new additions major and minor. As the third busiest airport in the world, this is a representation of the 42 square kilometer airport that brings people from all across the world.

With detailed buildings all across the airport, including the T2 & T2B terminals, Heathrow visits will soon feel far more populated than beforehand.

High resolution texturing is used throughout on both ground and building textures. This extra depth alongside various ground markings and taxiway layouts ensures Heathrow feels accurate to the real thing.

Various other visual effects are put into place, too, such as LOD techniques to help create a much more impressive visual finish without a detrimental impact on performance.

For Londoners or those who have traveled to/from London Heathrow, this should create a far more familiar flying experience. Not only does the airport now feel more alive, but the X-Plane 11 level quality detail makes sure it never feels out of place.

Keep Heathrow part of the X-Plane 11 world whilst improving the quality massively with this X-plane specific update. 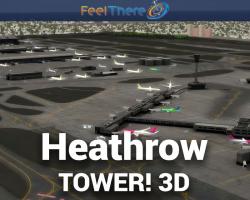