Over 80 airlines use Heathrow, flying to over 180 destinations in over 80 different countries. It also serves as a base for Virgin Atlantic and is a primary hub for British Airways.

As we might imagine, the airspace over Heathrow is almost constantly busy, with air traffic control organizing approaching traffic into a holding zone (of which there are four) before guiding them into a single stream of traffic.

All of the buildings and facilities, as well as the four-passenger terminals and the cargo terminal, have been reproduced with a remarkable sense of authenticity and realism using 3D modeling and highly technical and detailed graphic design.

The lighting effects add yet another layer of realism, as does the day-night cycle, airport service cars, and general traffic. 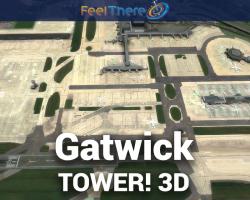