Having long been a huge part of the flight simulation world, JustFlight have been famous for producing truly awesome flight simulation content for a long time. They are well known for delivering high-end finishes and truly epic products fit to last. Read more...

This latest release from the flight simulation gurus represents an incredibly modern phenomenon within the aircraft world; Very Light Jets. If you’ve never heard of this before it’s probably because they are relatively new to the scene, and give you all the help that you need in becoming truly interested in what the lighter equivalent of the normal jet can do.

One of the first of the latest generation of changes and improvements to the world of light corporate flying, this is operated by just one pilot and can be the most leisurely and private way to travel for high-end business names and dignitaries.

The VLJ was first created as a gambit for those who want to see a more affordable level of corporate jet become available, ensuring that those with a bit of excess cash would be able to make the payments and actually improve the way that they are getting around the world at the moment.

That’s what this brilliant Just Flight expansion adds on – a whole new level of authenticity and quality for everyone. If you are sick of just going around in circles and hoping for the best, you’ll absolutely love the new features and styles that this brings to the table for you.

It takes away a lot of the hardship of flying a commercial jet and ensures that you can stop “circling the drain” so to speak and start learning improving and becoming a more composed and confident pilot. If you want to start getting better as a pilot, too, this can be the perfect way to facilitate that growth.

It helps you start to see things a bit differently and will ensure that you get all the learning that you could possibly need to start preparing for either handling one of these in real life or being a passenger on one. This package gives you the chance to see how flight has changed, and how the world of the jet is never going to be the same again in the future thanks to the incredible changes that are fostered in place by the change of size and style of jets.

Designed to the typical Just Flight standards of realism and reliability, you’ll be getting as close to the real thing as the current groups are able to do so. The quality of both the interior and the exterior are absolutely sublime, and ensure that you have an aircraft in front of you that you can genuinely feel proud of using in the future.

Available in both 2D and 3D cockpit modes, as well, you’ll be able to get something that runs smoothly on your PC whilst giving you the maximum simulation possible.

As you will know if you have ever used a Just Flight product in the past, the thing that you need to get used to is what they haven’t changed! They totally re-calibrate the entire flight simulation experience. By getting you more realism, more quality and more class you’ll be able to truly enjoy the different styles and qualities that a flight simulator can provide you with if you know where to look and learn!

Aside from the usual spree of graphical updates that blow away most users, this brings a whole other stream of useful additions to the table as well. It changes the overall flight dynamics of the aircraft, for a start, ensuring that it flies just as your typical VLJ aircraft are flying in the real world.

Now you’ll no longer feel like you are missing an extra burst of power or that your aircraft is a bit weaker than it should be; with the help of these simple mods you can change it up entirely and give yourself the kind of help that you need. Flight styles will vary depending on your own personal preferences but it adds in the ability to be unique, to be yourself.

Instead of just going with what seems to be the right idea and the right way forward, you’ll be able to find that the strategy for each flight is different as the simulator takes into account far more than it used to; now, you’ll be able to really push the boundaries and give yourself the kind of flight performance you expected when you first fired up FSX for the first time!

Take away all of the usual thoughts and fears of making the flight too hard for yourself; with Just Flight, even the advanced maneuvers will feel easier to do. This isn’t because the aircraft are simplified – they are more detailed than ever – but because of the sheer amount of options that you have in front of you. Instead of just going with a line-up and style that fitted the budget and the timescale for each craft that Microsoft, Just Flight go that extra mile to make sure the aircraft flies in the manner it was made for.

Customized viewpoints and nose wheel displays when parked up are just some of the nice little extras that have been added in as well to help really complete the experience completely. Interested in seeing how things will change in the future for the VLJ? Then you’ll need to try out this amazing package to get a true understanding of what the future just might hold for these new styles of aircraft.

Rather than just following the old regime and thinking that it “feels” right, you’ll really be able to get those amazing changes and features that you usually would only see on TV shows or in movies.

It’s these key little additions that take you further beyond the basics of simulation to deliver one of the most enjoyably comprehensive programs we’ve ever come across in FSX. The VLJ package may be based on new technology, but it brings years of expertise and knowledge about flight simulation to the table and uses it to maximum effect! 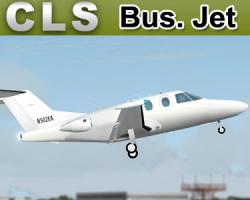 VLJ's or, very light jets, are small business aircraft designed to be flown by a single pilot, targeted towards smaller independent business owners by being vastly more affordable than any traditional business jet. Just Flight's wonderful payware model follows similar logic, in that it comes with all the quality you would expect of a payware business jet, at a very affordable price. Available as an immediate download for users of Microsoft Flight Simulator X and FS2004, this VLJ will make a great addition to your business fleet.

The 3D model is full of small details that are accented by good textures and some really nice visual effects. Between the dynamic shine that causes light to seemingly bounce of the aircrafts surface, as well as rain and snow effects on the windows, this VLJ boasts some impressive visuals that will help make your flights feel really cinematic. You also get a lot of options when it comes to the livery, with thirteen to choose from, all of which are well crafted and feel authentic. On top of that, a paint kit is included in both a layered and a non-layered version, so you have absolute freedom to create your own custom liveries.

A wide range of animations boost the level of realism to new heights. With rotating engine fans and wheels that show compression when the hit the ground, to pilots that animate even in the exterior model. Although small, it's details like this that really bring the aircraft to life. You may not even notice them at first, but if you were to look at the engines during a flight and notice that the fans were not spinning, that could completely ruin your immersion; a lot of little details working away in the background to keep your overall experience smooth and realistic, is definitely preferred.

The virtual cockpit, which is available in both 2D and 3D, has a very well crafted instrument panel where you will find a fully functioning PFD (Primary Flight Display) and a MFD (Multi-Function Display). Also fitted with TCAS (Terminal Collision Avoidance System) and an integrated autopilot panel, you will find that this VLJ is fully equipped and ready to bring you hours of enjoyment.

just downloaded and very disappointed. The plane comes upa a swhite shell. No display of livery. Probable does not support higher than DirectX 9 It does seem like fun plane to fly 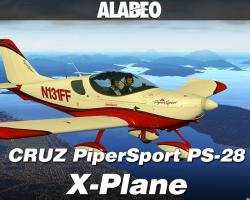