Journey to far off Cumbria with this exciting expansion for Microsoft’s already incredible virtual flight simulators! Team SDB has developed the wonderful RAF Station Silloth Scenery which is compatible with Microsoft Flight Simulator X and is available for instant download to ensure happiness as soon as your internet connection can finish downloading! Read more...

This file is also quite small, meaning that it will arrive on your desktop almost instantaneously after clicking download. The airfield is historically significant, since many of these hangars were present in Britain during the war and into the 1940s, meaning that not only do you get to increase your flight experiences and personal collection of awesome content, but you also get to experience a slice of history you might not have had the opportunity to see.

This fully detailed airfield is chock full of realistic and exciting features that create an accurate and interesting scene for both flight enthusiasts and aviation experts alike. The RAF Station Silloth Scenery features a great collection of AI, which, while enhancing to the overall feel of the sight, are not flyable. This shouldn’t be too much of a turn off though, because it enhances the overall experience to a point that this is mostly negligible, especially considering the other dynamic aspects of the RAF Station Silloth Scenery.

The attention to specific technical details, such as lighting of the airfield is truly impressive, especially considering that this scenery package is as inexpensive as it is. You really get a full featured and robust experience, with multiple hangars and other airplanes on the airfield.

For only nine dollars, this expansion of scenery is truly a steal, and worthy of being added to any veteran flight simulation buff’s collection, not to mention any budding aviation fan looking for more historic information about the world of flight.

By the end of hostilites in 1945 there were over 2000 military airfields in Britain. In response to Nazi Germany's rearmament program old WW1 and civil airfields and later RAF airfields were upgraded with permanent buildings and hangarage during the RAF's " Expansion" period of the 1930's. Following the outbreak of war farmland was requisitioned and hundreds of "austerity" airfields constructed using prefabricated hangars, accomodation and technical buildings. Many airfields were constructed in the west of Britain and allocated to Operational Training Units (OTU's), Maintenance Units (MU's) and Aircraft Storage Units (ASU's) as they were considered to be beyond the range of enemy bombers.

One such airfield was RAF Station Silloth on the southern shore of the Solway Firth to the west of Carlisle in Cumberland (now Cumbria).It was built as a Maintenance Command station following typical Expansion Period design, but was transferred to Coastal Command with 22 Maintenance Unit forming a station within. The Coastal Command group pool had been re-designated No:1 Operational Training Unit in April 1940 receiving Lockheed Hudsons direct from the USA and Canada.  Sadly many of these aircraft and their crews were lost in the Solway Firth on training flights, hence it being known locally as 'Hudson Bay'.

In 1940 Silloth was attacked several times by the Luftwaffe proving to be not quite out of range.

Silloth follows the usual RAF layout of 5 hangars ( 3 Ctype and 2 D type) facing the "bombing circle" on the technical site and 3 intersecting runways with surrounding perimeter track and additional D , L and E type storage hangars along with 13 Robin and Super Robin hangars on dispersed sites around the airfield. All of these are modelled.
Today Silloth lies abandoned by the RAF with many of the hangars occupied by local businesses.

Aligned with UK VFR scenery. ( But no compatability claimed.)

The scenery consists of

Note: The AI are not "flyable" and along with the statics may not be compatible with DX10. 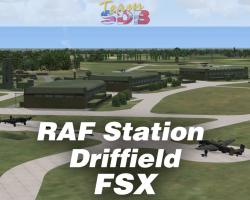 Love it... very realistic and has a lot of fond memories for me as my gran lived a stones throw away from the base. Big shame that Simshack don't allow multiple downloads as I now have a new computer tsk tsk great scenery add on though. 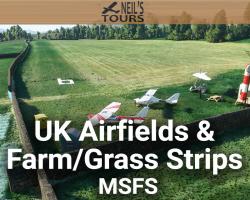