RAF Binbrook: End of an Era Scenery for FSX/P3D

The RAF Air Base RAF Binbrook is among the most well-known air bases within the Lincolnshire area. Although it shut down in the 1980s, from its development in 1939 until closure in 1988 it played a major role in military and civilian aviation in the region for some time. indeed, today, the old domestic site, where married couples lived, has been kept and revived into a new village known as Brookenby. Read more...

The air base was most commonly used by Bomber Command and provided a significant strategic starting point for many a bombing run. That being said, post-war it served as a home for other groups such as the Central Fighter Establishment. Perhaps its most famous use though was the base where the last two RAF squadrons flying the English Electric Lightning aircraft from 1965-1988.

Today, much of the old area is gone, replaced by industrial estate housing for businesses. It also offers a large memorial for the 460 Squadron with names of former heroes who lost their lives.

This add-on for FSX and P3D, then, relives the final decade of the air base before it was closed down and reconverted into a village. If you would like to add a nice piece of aviation history from British military performance, this is the place to start.

You can view the user notes/manual here. 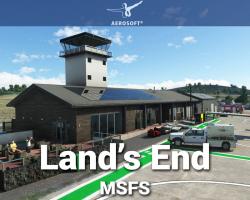 RAF Binbrook is not included in the standard FSX installation nor in UK2000/Playsims VFR Airfields so this is a very welcome addition to my very limited simming experience. I have happy memories of serving at Binbrook in the early '70's. Good to see that MSF and the bomb dump are reproduced here and the 5 and 11 Sqn. Lightnings lined up on the pan look really impressive. AI traffic level is not so overpowering as to impact on what 'you' want to do. All in all, for me, a good value add-on. Just one little niggle - it would have been nice to see the Spitfire 22 gate guardian at the main gate!