Taking on the fantastic, old-school Cold War design of the Scorpion is something that everyone should do when they first want to take on a new kind of aircraft, especially if you like flying old-school war aircraft. Read more...

Indeed, thanks to the production of this amazing little war fighter, a lot of things changed within Russian aviation.

The fact it was capable of carrying so many misses - 104 in total - made it quite unique for an aircraft of this size, whilst also coming with nuclear-tipped missile capabilities and a fantastic Hughes fire control system. Add in radar and computer support and this was, at one stage, one of the most fearsome aircraft of its era.

Now, you can get to try it out and see why this was so revered for such a long time.

In this package, you get to fly around in a realistic rendition of this aircraft, with extra liveries included such as;

Additionally, both R3Y-1 'Cruiser' and R3Y-2 'Bowloader' variants have been included. 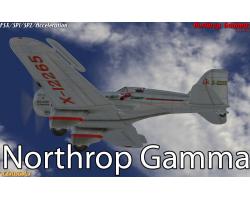 I always preferred flying around in an aircraft like the Scorpion as it's got that really old-school design. Many aircraft today for me feel too advanced for normal people to really enjoy in a simulator; you feel like you are flying at like, 30%?

Therefore with little extras like this I really wanted to try and get that total feel as its far more my 'type' of aircraft. I know from my own reading that it's slick and easy to use and that is what I noticed as soon as I fired it up, and I instantly noticed that its reputation for firepower was not being overstated.

Its sheer range of firepower made it something to be feared in my eyes, but something that I really wanted to fly - it's safe to say I got that enjoyment when I installed this. As far as capturing the Scorpion in all of its glory goes not many choices I've ever had the pleasure of using in a simulator have come close.

Virtavia done a great job on making this stand out and it was incredibly easy to use, simple to install, and much more enjoyable to use in general. The whole package stands out for me, and would recommend that fans of the Scorpion like myself take the time to come down and try it out when they feel like they need something else to mess around with because this is so much fun to fly!

One of my all-time favorite cold war fighters, the F-89 looks lethal and all business. The large, thin main gear wheels are of particular interest. The Virtavia model has been around for awhile but is a very good representation of of this mid-50's classic.

Exterior modeling is good, animations are decent, but interior view are limited to VC cockpit of pilot...a view from the weapons officer would have been nice. Paint schemes are limited, and the F-89 had many colorful markings in its lifetime. The Idaho ANG scheme is missing the national insignia on the fuselage, which bothers me a little.

All in all its worth buying, since there are no other examples out on the market and the Scorpion needs to be given its due.