As two of the most important parts of the Southern California landscape and industry, San Diego and Los Angeles are seen by many as key players within the US economy and culture. However, both sites are quite poorly represented across FSX and P3D and this can ruin the spectacle of flying over and not being able to see two of the largest US cities in their glory. This modification, though, changes that entirely; it puts everything into the right context and manages to capture the variety in layout and style between both cities perfectly for the most detailed style possible. Read more...

By giving you two cities in the one collection, you get more than 20,000 square miles in this one package giving you one of the most comprehensive collections of size out there in a scenery package. In fact, given the 24GB of data included in here, you’ll need to make sure that you have a large enough hard drive to store it all!

This high-definition title makes up for the size and scale by using accuracy, attention to detail and realism to create a 50cm/pixel design for both cities. This follows the real plans to the very letter, ensuring that landmarks and key locations are placed perfectly within the flight simulator.

San Diego was the first locations of the West Coast that was actually visited by Europeans, so by rights it’s seen as one of the most important parts of US history. Having been used as a port for immigrants to arrive as early as 1542, it was once under Spanish rule which served as the key cog for the creation of Alta California some two centuries later.

Although San Diego and by extension California have been involved in so much, this city still manages to stand as one of the economic pillars of the region and indeed the whole US. Its sprawling harbors match up perfectly with its stunning beaches, which are all represented to perfection within FSX.

LA, however, is the larger of the two cities – the second largest in the whole US – and is known throughout the world as a hub of quality, entertainment, culture and wealth. The land itself was captured by the Spanish in 1542, and the city was “founded” in 1781 to begin a revolution which, to this day, changed America entirely. With 13-18m residents, it’s a true hotspot of American culture.

If you would rather have the whole area lit up and managed to the most intricate detail, though, you can download the photorealistic package for the whole state of California instead.

This covers the whole terminal control areas of both cities, giving you a massive range of size and scale between both to cover. With surrounding areas managed perfectly by this inclusion, you get to see more than just two cities being matched up; you get to see the most prominent parts of the entire state changed to fit their real layouts and styles. 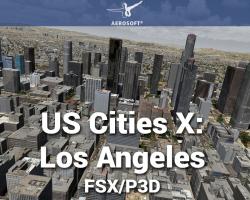 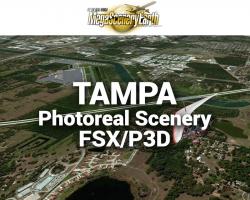