Visulator SX is an application that has been developed by the team over at Invertedcosine, to be used along side Microsoft's Flight Simulator X. It's a nifty little application that will completely change the way you view your simulator, offering a dynamic alternative to data feedback without dampening your visual experience. Read more...

The SX version of the application, unlike the VX version, is not designed to be full screen. Instead, this slightly more compact version has been designed to fit alongside your Flight Simulator on a single monitor, instead of on a separate screen. Although the format ratio is specific as to sit side by side with your simulator, SimConnect sill allows the application to be used across a network of computers. Visulator SX sports a cool blue, futuristic theme that is stylish enough to stand out, but not so much that it detracts from your simulator running along side it.

The application cleverly takes all of your core flight information and displays it along side your Flight Simulator window, without any need for a virtual cockpit. With Visulator SX, a limited number of number of functions are interactive, including a fully featured radio stack, with Sound, Transmit and Swap as interactive buttons. You may find that Visulator displays more than you would normally get from your various virtual cockpits and panels, with features such as G Force indications and ground proximity warnings. Core indicators, like that of Altitude, Pitch and vertical speed, are positioned either side of the central interactive display, along with buttons for activating lights, landing gear and more. Everything in one place means you, the pilot, have full control.

With such a simple set up and ease of use, combined with such a massive output of important data, Visulator SX makes the perfect partner for any type of flight.

FSX Visulator SX is an exciting new application that enables you to see Microsoft Flight Simulator X in whole new way. This app fills the gap that's been missing, having the ability to view all your flight data in one place LIVE. It gives a dynamic experience of data feed back during flight.

Using SimConnect it allows it to run on local or network computer with minimal configuration. Don't you just hate it when you find a nice aircraft and it is great to fly but the cockpit just doesn't meet your expectations, well this application will change that. You can land and takeoff almost any aircraft using this application. Not only does it display the information in a dynamic way it also enables you to be able to control the information. Enabling you to control radios, Spoilers, Lights and much more.

The applications in based on the Visulator VX platform but has be specifically designed for running side by side with FSX on one monitor. It can still function on multi monitors or across a network as well.

Difference between the SX and VX versions

The main difference between the two products is the size. FSX Visulator VX is bigger and designed for using a whole screen like on another computer, FSX Visulator SX is a cut down version which is a lot narrower and has been designed to fit side by side with flight sim (see the images for an example) or for use on a small external monitor. 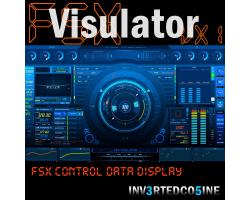 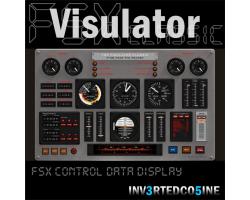