CR1-Software have created an absolutely stunning model of the iconic Ford Trimotor, available as an immediate download for Microsoft's Flight Simulator X SP2 and Acceleration. The Ford Trimotor is recognized as the very first passenger carrier, built in the late 1920's and as such, represents an important part of aviation history. Read more...

All of the included models were built in 3DMax and are massively detailed, squeezing so much out of FSX that you wouldn't even think it possible. The flip side to this of course, is that it requires a pretty beefy system to run. As it was designed around the Intel i7 processors, with multi-threading and hyper-threading technologies, having one is pretty much mandatory. To compliment the processor, and decent video card and memory is required. But if you have an i7, chances are everything else will be up to par and believe me, it's worth it.

The fuselage and wings are made from an aluminum alloy and corrugated to improve strength. Ordinarily one might expect this the visual effect to replicated simply using textures, but with the CR1 Ford Trimotor, the corrugated effect is actually modeled, giving you a sense of how detailed it actually is. The most impressive part of the model is perhaps the three hefty engines that probably contain more polygons than some complete aircraft models.

A full host of animations don the exterior of the aircraft, all those that you would expect plus some special ones like shock absorbers and gear flex. The interior cockpit also features a full animation suite, and while it is also highly detailed, it is quite an adjustment if moving from present day passenger jets and may take some getting used to. That being said, it is definitely the place to be to get the most out of the realistic flight characteristics, the accurately portray the performance and behavior of the original Ford Trimotor.

A total of nine liveries reflect the era of the aircrafts construction and on the whole feel quite genuine. There is enough variety that most pilots will have a few to their liking, although a painters kit is included to remedy that if needs be. Along with an excellent sound suite, the amalgamation of all these parts creates a visually compelling and enjoyable experience, as well as providing a little piece of history to your virtual hangar.

We are pleased to present our newest addition to the CR1 storefront, the CR1-Ford Trimotor. The Ford Trimotor is an iconic and very important plane in aviation history. It was the first major airline style passenger carrier built from 1927 to 1933 during which period 199 units were built and distributed worldwide. Built by the Ford Motor Company by automotive visionary Henry Ford, this great pillar of aviation history, the Ford Trimotor, was not only used as a passenger carrier by many well know airlines of the time, it was also used as an air freight carrier as well as a supply and personnel carrier by the U.S. military and Canadian military, thus proving its ruggedness, reliability and versatility.

This add-on is of EXTREME DETAIL, it was designed for the new i7 processors and around newer multithreading and hyperthreading technologies that are prevalent in today’s operating game machines. It is recommended that this add-on is run on an appropriate computer with a recent and decent video card and multi-core processor as well as a good allotment of ram. 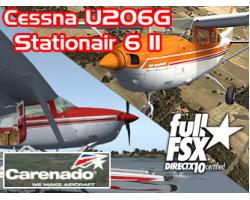