Should you like to fly aircraft like the DC-9, then you might find the sound quality a touch lacking. This is true for both FS2004, FSX and P3D. This add-on from Turbine Sound Studios, though, does a good job of correcting that problem. The DC-9, for example, is one hell of a loud of aircraft. That’s not very well managed in the simulators so far, so this add-on helps to add that missing boom and thrust from the engine. Read more...

Not only does this vastly help to make the whole experience feel more welcoming, but its more immersive. That classic whine heard from the engine as it screeches into action is one thing; the rich roar of the aircraft is even more noticeable. Not only that, but you will find that this helps you to really control that noise if you find it’s a little too much!

The aim, though is to simply capture the sound and the precision of the real thing here. based on the DC-9 project that began way back in April 1963, this add-on really captures that old-school sound effect. The classic boom of the old Pratt & Whitney JT8D Turbofan engines is captured with immense precision. As is the high-efficiency wings and the T-tail, helping to really capture the sound they make as they catch in the elements.

For years, this long-lasting aircraft has been undervalued in flight simulation. This soundpack helps to add some of the much-needed and valuable sounds which we expect to hear from the cockpit. Better ambiance and more natural reactions due to the sound accuracy make just two of the key reasons why a flight at the cockpit of the JT8D makes such perfect sense. 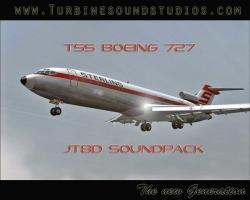