As we all know, flight simulation is at its best when the aircraft that you are flying feel exactly as they should; when it comes to the P-40 Warhawk, this couldn't be any truer! This is a perfect replica of a hugely important figure within the Second World War. It's evident that the aircraft used at this time was one of the most important factors of the war actually turning around - without the power of the skies; the Allies would almost certainly have succumbed over time. It was thanks to aircraft like the P-40 that the tide was eventually turned. Read more...

This package is presented to you as part of the Wings of Power series, which is created by A2A Simulations. Their knowledge of piloting an aircraft is almost unmatched within the community, and they are a hugely innovative group that is regularly producing new content that comes from various timelines and celebrates various parts of flight history. This package brings to life famous Second World War aircraft, giving you the chance to fly them in absolutely stunning detail with unerring accuracy in the way that they are presented. Nothing is more important than being able to fly an aircraft and feel every last sinew of the aircraft react to what you are asking; with these add-ons, you will get just that!

The reason that the Warhawk was so well-loved at the time of its creation was because of just how many of them there were; they filed the skies in vast numbers. Although they were nothing revolutionary in terms of firepower or armor, they were nimble enough to cause problems and gave the Allies a vital mass-produced aircraft that could systematically cause havoc. Cost-effective to build and simple for pilots to master, this aircraft became a flagship for military aviation and was a popular model throughout for pilots of many persuasions.

It took part in Africa, Asia, and Europe in terms of theatres of war, and was an instrumental part of making sure that the skies were secure so the ground troops could do their jobs. It's always been noted just how important aircraft were during the battles across the Second World War, and this certainly rose to fame thanks to the characteristic shark-toothed design that made it really stand out from the crowd. This was when the aircraft was part of the American Volunteer Group Flying Tigers who were one of the most inspired flight groups out there during the war.

Eventually, the aircraft was succeeded but it left a legacy for civilians, too. It was the framework of the Curtiss Hawk which was improved using the massive amount that was learned from the P-40. Having originally taken its design from the Curtiss in the first place, it was a nice way for the aircraft to make its mark on time.

If you want to fly a stunningly realistic equivalent of this famous aircraft, this is your chance!

Of course, no real A2A Simulations product is ever complete without their ACCU-SIM inclusion. This helps to bring each aircraft they release to life, giving a whole new level of authenticity and control over what your aircraft is doing. Worried that your comparative relic of an aircraft will feel a little "too" similar to the modern equivalents today? Then ACCU-SIM is what you need.

It totally transforms this normal preconception and makes sure that there is a genuine ruling to follow whenever you step foot into an aircraft. When it comes to the P-40, though, ACCU-SIM really gets to shine a light on why it's an absolute must-have in terms of quality.

Whilst the normal person who reads about this aircraft in passing might be led to believe that it only won due to its strength in numbers, this is an aircraft that merely used the vast numbers to confirm their superiority.

This is where ACCU-SIM can be so incredibly useful - it brings these facts to life, and makes it so much easier for you to start seeing a real difference between each aircraft that you step into. This was an aircraft that will really need to be compared against contemporaries to see a genuine fair battle in terms of features and performance, but the facts are that you'll be able to really see a difference in your FSX experience and overall education by using this mod.

It helps to really increase the tempo and things that you need to remember when trying to fly an aircraft - ACCU-SIM introduces the old adage that no two flights are the same arguably unlike any other mod on the circuit ever has.

This helps to really bring the entire thing together and leaves you with a much more comfortable path moving forward in terms of learning how to fly properly. It challenges you to think like a pilot and to learn like one, too - all of these new challenges that previously were never even contemplated within FSX will make sure that you start to really get the pilot's education any flight simulation fan would absolutely love to help.

With all of the unique features and interesting additions that make up this package, the addition of ACCU-SIM is the final seal of approval that you need to get the most out of your experiences in Second World War aircraft.

In short, this is a package that really augments the original download - with the help of ACCU-SIM, you no longer need to feel like you are getting a bite-sized chunk of what flying one of these would be like. Instead, you get to feel the full force of this brutal aircraft, with you in total control - change your entire outlook on this aircraft by trying it out with the added bonus of ACCU-SIM.

It completely revolutionizes the experience for most people and helps to really get you on the right track in terms of being able to understand how the pilots of the era actually coped. 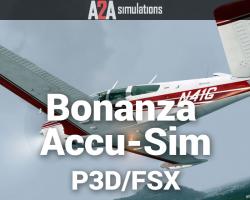