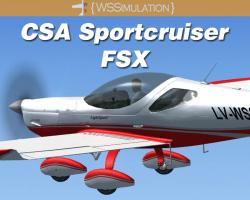 This Czech Sports Aircraft, now known as the CSA SportCruiser has been wonderfully recreated by WSSimulation. Available as an immediate download for Flight Simulator X, this add-on provides an immersive and realistic flight experience, in an attractive and light weight sports aircraft.  Introduced in 2006, the CSA SportCruiser is made entirely of aluminum and has an empty weight of 740 lb (335 kg). It was designed to fit into the ultralight or microlight category, although it also falls under the light sports category within the USA.

A well crafted model accurately portrays the aircraft and all of its primary traits. From its tricycle undercarriage and fixed wings, to the three blade propeller mounted on the nose in front of its single engine that provides a cruising speed of 133 mph (214 km/h), everything is accurate and the overall model quality is high.

Four included liveries offer some variety and each adds some color to the aluminum body of the aircraft. The texture quality is good enough that you can see all sorts of small details like panels and rivets, adding to your visual experience. Boosting it even further are the range of exterior animations like moving ailerons and rudders, that separates your aircraft from other static objects inside FSX. Made all the more special with the included sound pack that provides quality audio to accompany the 3D model; the two come together very well and create a seamless and credible aircraft that you can have hours of fun with.

Modeled in GMAX, the highly accurate cockpit is fully interactive and all switches are animated and can be controlled as they would in real life. From the throttle lever to the 3D gauges and numerous electrical switches, the cockpit is definitely the best place to be for the most immersive experience. The large domed cockpit provides almost a 360 degree viewing angle, allowing you to take in some spectacular sights, unhindered by the aircrafts frame. At night the gauges are back lit and the warm cockpit lighting creates a relaxing atmosphere.

A PDF is included that provides all necessary information regarding checklists and control panel descriptions, to help you get off the ground and back down again safely and swiftly.

In January 2010, the SportCruiser was added to the Piper Aircraft line as the PiperSport under a licencing agreement with Czech Sport Aircraft. This arrangement was terminated one year later in January 2011

The cockpit is a very high accurate 3D model, and fully interactive. It is made in Gmax and all switches are controlled like a real aircraft with all animations.