Boston and the surrounding areas, including major airports ranging from city locations to more rural ones, and nine helipads, is brought to life in this scenery package for FSX/P3D. Read more...

Perhaps Boston Logan International Airport is a definite location starter for any virtual pilot, which resides almost at the heart of the city of Boston and a short distance from Boston Harbor’s islands. So, whether the virtual pilot wishes to appreciate the bustling city life below or the more scenic views of the New England-style coastal homes, they will notice the realism and authenticity.

The downtown sound effects and traffic noise of the city are realistic, as are the sounds of wildlife such as gulls along the coast. And in a similar way, the downtown traffic on the busy Boston highways is matched equally well on the coast in Boston Harbor with the animated ships and boats.

The package features 4000 reproduced major buildings, as well as over 350,000 further realistically placed autogen ones.

One thing to note is that there are no night textures or seasonal changes. This is essentially due to the large file size required to reproduce the ground images. 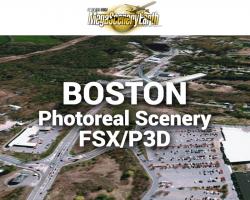 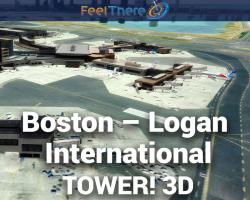