Billund Airport FSX is now available for your flight simming adventures.  This airport has been made with extreme quality photo real textures on the buildings.  The model itself is so true to the real life airport, that you will be amazed. Read more...

Billund Airport is the second largest airport in Denmark. The airport has been beta tested by real world pilots, and by people with inside knowledge of the airport structure and placement of each building.

Furthermore, flight simulator fans as your self have been testing this product, to make sure that it works as advertised, and it does work.

Billund Airport was according to Wikipedia ranked as number 10 out of a few 100 in the Nordic countries, when it came to the total passengers count for that year.  The count was on 22,835 at the end of 2009.

Billund Airport is well known among several nations, but mostly in these areas:

Lego land Billund is the original Legoland theme park, located in the middle of Jutland, the part of Denmark that "juts" up from Germany.

Lego land Billund is located directly next to the Billund Airport (Billund Lufthavn).

Photoreal ground textures are also planned as an update later.

It is not hard to tell the realism this product has.   It has taken several months to complete this project.  Billund Airport FSX had a total of 30 fps on the test system, which was an I5 dual core processor with 4 GB Ram, and had just under 22 fps on less greater systems which also were used for testing.

There’s a lot to like about this little Danish airport. With all it’s High Quality Textures and lighting I’d rank this one up there with the likes of Aerosoft’s Megascenery series, which is no mean feat. Unlike Aerosoft’s sceneries though, Aero Files Billund is a lot easier on the graphics card and that translates to better FPS. I managed a respectable 16 FPS in Level D’s 767 and double that in the default aircraft. If you do find it a little hard on your system, check out Aero Files forum on their website. There they have a few tips and fixes for getting the most out of the airport whist saving you from the stutters. - Jessica Bannister-Pearce 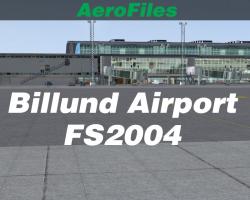 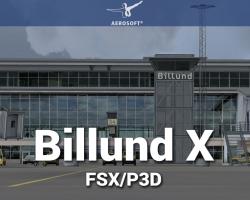