Flight simulation isn’t only visual. Any pilot knows that the sounds made during flight by the aircraft cutting through the wind and the engines in their various states of operation provide valuable clues through which a pilot learns what is needed.

The speed and pitch of the engine sound is as important to flying procedure as visuals or instrument readouts. The Beechcraft Baron 58 Sound Pack for FSX provides the sounds needed to complete your simulation experience.

Rev changes for takeoff and landing, climbing, diving, cruising at and changing to various speeds are all included in this sound pack. These sounds give a pilot information about the state of the flight that cannot be easily gotten in other ways. More than the flight clues are the excitement and completeness of the experience!

Any movie maker knows the importance of the soundtrack. Any film or TV composer knows that without music, the power of the experience is lost. What would ET have been without John Williams’ Oscar winning music? This sound pack for the Baron 58 will add those essential components of the flying experience.

Recorded in high resolution stereo, your sound system will deliver real, live sounds taken from the Beechcraft Baron 58. Engine states, wind, flaps even the sound of prop changes are included, all designed to fill out the already powerful flying experience.

The realism of sounds recorded for every flying condition add that depth and richness of experience and make your flight easier as well. No more missed clues, fewer mistakes and better decisions are only a part of the enhancement you’ll enjoy with this sound pack. Experience the realism, get lost in the totality of flying not only by eye but by ear.

Enjoy the full realism of engine sounds from the Beechcraft Baron-58 the way it was meant to sound. Bush pilots and simulator fans will enjoy the turbo charged piston engine quality from the interior and outside of the Baron-58. All audio was kept at full quality from thier original recordings taken resulting in a real experience you have to hear to believe.

Note: Sound package has not been tested for Flight Simulator 2004 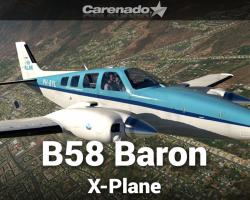 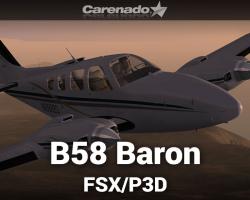 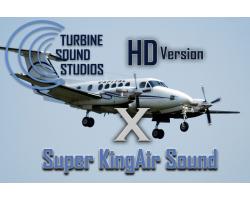 I think there was an improvement re engine sounds but feel like the sounds of the landing gear/wheels when landing and taxiing is maybe over-done but then I've never flown a real aircraft so maybe it's ok.