There’s something quite special about being able to sit in the cockpit of an aircraft, and part of that comes from the sounds you hear. The sound of an aircraft the size of an Airbus A300 is quite a sizeable volume too. However, using FSX/P3D you would not know. This add-on from Turbine Sound Studios helps to fill in the blanks, making it much easier for you to control and enjoy the whole audio experience far more. Read more...

Now, with this add-on, you can hear the CF6-50 engine roaring into life and action without delay. The sounds will be far more in relation to the actions that you take, while the aircraft’ every performance will feel far more in-line with what you might expect.

This sound package builds on an aircraft that can accommodate 250+ passengers. So, expect the noise and the ambiance to reflect such a busy aircraft. TSS has made sure that while the A300 has been out of production for over a decade, it’s legacy as a hugely popular aircraft can live on in style.

It’s the kind of aircraft that really produces a booming range of sounds. This helps to accurately portray those sounds in a meaningful way, ensuring it really produces the sounds of the real aircraft without merely being for effect or for ambiance. These sounds really relate to what you do in the cockpit, making it much easier to enjoy the whole experience. 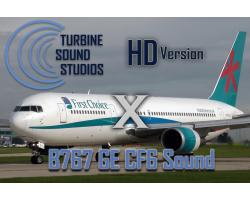