Created to offer unprecedented realism when flying this model of aircraft, the Turbine Sound Studios package has been put together to make sure that when you fly the Piper 28-201, you get all of the realism you need. Read more...

The sound effects are created in stunning HD detail, making sure you get all the help that you need in really buying into the sound and the style of this unique aircraft type.

Everything is heard as if you were sitting in the cockpit yourself, giving you a much easier way to know how your aircraft is reacting to what you do. Indeed, the product has been developed to ensure it works snugly with any remake of the 28-201, although it is specifically designed for use with the Carenado package.

The Lycoming IO-360-C1C6 engine provides 200HP, or 149 kW, and was a key part of the success of this aircraft in the first place. The engine is one of the most important parts of the aircraft and usually dictates a large part of the sounds that you hear.

For this mod, we have concentrated heavily on the creation of unique sounds that will really capture the authenticity and the effect of flying in this kind of atmosphere as well as helping you clearly understand what it takes to fly something like this and make it a success. 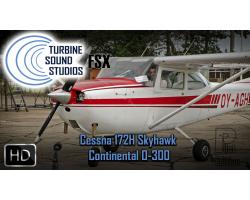