This is the second version of the Embraer E-Jets package for Flight Simulator X and 2004, developed by FeelThere. These E-Jets are a series of narrow bodied, medium ranged jet airliners fitted with twin-engines, and are produced by Embraer, the Brazilian aerospace conglomerate.Both the Embraer 175 and 195 make up part of a relatively new family of aircraft that are equipped with state of the art technologies, offer sensational performance and amazing comfort for its passengers. With Embraer having already built up a back log of orders in triple digits, it's a good job this package is available as an immediate download, so you can jump the queue a little bit. Read more...

Two great additions to this package are the included 'Call!' and 'Map!' add-ons, giving you the total functionality of three add-ons, all under one price tag. The former adds a First Officer who will read through checklists, and voices for the hostesses. The later, adds an animated map screen to the backs of the seats in the cabin that shows your current location on a map, along with elapsed and remaining time, altitude and all the rest you'd expect. This add-on in particular goes very well with the already incredibly detailed interior cabins, both economy and business, but adds a level of depth and realism that textures and animations alone couldn't match.

Inside the fully interactive 3D virtual cockpit, you'll find a mass of instruments and features including an FMC that is amazingly detailed and realistic. It's even programed with a learning function so that the more you use it, the better it will become at predicting your flying habits.

The flight dynamics for these E-Jets were based on the manufacturers specifications, so rest assured that their performance, handling and behavior are as close to the real thing as you can get. Made all the more immersive by an extensive sound set that not only represents the engines, but the sounds of the auxiliary power unit, batteries, air conditioning and even passenger signs. These details help make it possible to completely suspend disbelief and really sink into the pilot seat.

As it should, this package expands on its original, making improvements and adding features, without detracting from the reason that people loved it in the first place. These Embraer E-Jets are super realistic, with all the best avionics and instruments, and are tremendous fun to fly.

The Embraer 175/195 range of airliners are an entirely new family of aircraft, with state-of-the-art avionics, fly-by-wire technology, superior cabin comfort and extraordinary and uncompromising performance.

"Most developers would charge extra for many of the features included. You get a ton of practical features with total integration, working today and on your desktop.  This makes for a most pleasing flight simulation experience. I find that when I don’t understand something fully, it doesn’t upset me as there are so many other neat features to capture my attention. Not promised, not being worked on, nothing. Delivered with your download." - Avsim 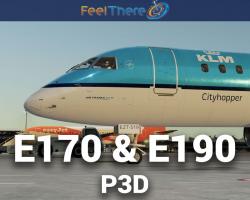