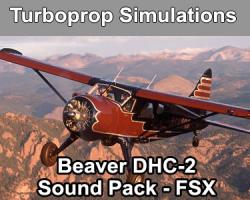 Enjoy the full realism of engine sounds from the Dehavilland DHC-2 Beaver the way it was meant to sound. Bush pilots and simulator fans will enjoy the loud piston engine quality from the interior and outside of the beaver. All audio was kept at full quality from thier original recordings taken resulting in a real experience you have to hear to believe!

Note: Sound package has not been tested for Flight Simulator 2004