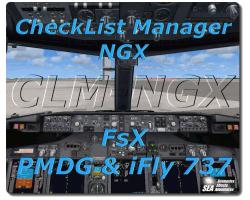 What is the CLM-NGX? This is a version of CheckList Manager dedicated to the 737 products from PMDG and iFly, unanimously approved by simmers as the most successful models for the FSX of these popular jet.

To facilitate the identification of the switches, the selectors and buttons to be used during the course of the flight, the cockpit has been divided into macro-areas marked by letters. In the messages of the CLM-NGX shows the letter corresponding to the zone in which is the element with which to interact. This system will get you up to fly with these complex aircraft immediately making you skip the step of frustration due to lack of knowledge of disposal of equipment.

As with all other versions of CLM the checklists are the result of the merger between the operating manuals and tutorials for specific models.

Even in the CLM-NGX will find the directions for programming FMC, also, will be guided in the management of certain features of FSX, again through the FMC, as both software houses have implemented this type of interaction.

In conclusion, there is no reason not to try to fly with these sophisticated aircraft with the support of CheckList Manager NGX!