As Microsoft Flight Simulator X has animated service crews at a many airports, now owners of Flight Simulator 2004 can have the same great features without the price tag! This upgrade for FS2004 has eight gate positions that will recognize all aircraft. A chart is included with this upgrade that states which aircraft will have perfect, precise alignment.

After pulling up to the gate, contact gate control through your new arrival/departure control board through the radio stack. After contacting gate control, animated vehicles including fuel trucks, fuel lifts, buses, and food trucks will service your aircraft.

Static vehicles including luggage carts, luggage trucks, and Flight Simulator 9 vehicles are also featured in this scenery upgrade. The jet way will also be operated through gate crew inside of the airport to align to your aircraft.

The following countries are included in this package: Austria, Denmark, Finland, Germany, Ireland, Netherland, Norway, Sweden, and the United Kingdom. This upgrade also features revamped graphics optimized for high frames per second as well as new textures and animations.

Even if you may not have the top of the line computer, scenery levels of AG 2011 can be toned down to best fit your computer’s performance!

The entire project has been revamped and optimized for high FPS (frames per second). All objects have new texures, new animations and a 3D ground gate operator. Plus you get 4 bonus 3D crew working around your gate.

Note: There is no longer double gates or Cargo in AG2011.

Just set your parking brake and wait 30 seconds for crew who will recieve notice to bring out the jetway and food service. The tug and luggage vehicles are high quality and static.

AG 2011 has 8 gate positions and will recognize all aircraft. There is a chart for what aircraft have perfect alignment. Most aircraft will not align with accuracy. AG 2011 does not use side programs and is designed for quality and entertainment purposes. From your VC view you can't actually see alignment and will only see a crew giving you full service.

Now you have an arrival / departure board you control through your nav 2 radio stack. Real flood lights for apron area and great for night flights. The apron is a groundpoly and will now show shawdows.

The Marshaller now aligns your direction as well as the distance. The marshaller's accuracy is one tire.

AG 2011 will be constructed at all major international airports covering over 9 regions. Regions sold separately. Or bundles Packages are available! Saves you 5.00 dollars.

AG 2011 uses Acti-Gate's module created by Arno at: FSDeveloper.comActi-Gate will be installed automatically as well as the entire region(s). Setup will only require a single self-install that includes a removable exe located in your programs list. There is only 1 step involved for adding scenery in Flight Simulator. Using the scenery library in options is always required. You must add your airports in this library. There is a User manual and video link included for adding scenery.

Airport addons may work . If you get a confliction or do not like your results. Simply go to the scenery library and remove the area in AG2011 and keep your nice airport.

If you have a slow computer and get low FPS. You can use three different scenery complexity levels in your game settings to remove some static vehicles and crew. This will increase your FPS. Testers and I have noticed about 10 FPS loss! 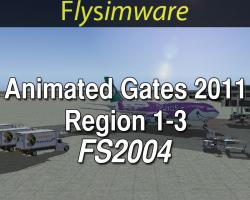 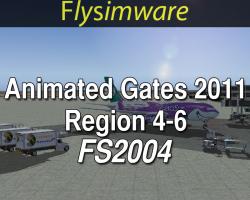