Welcome to Paraguay Pilots. Paraguay is a landlocked country in central South America, bordered by Argentina to the south and southwest, Brazil to the east and northeast, and Bolivia to the northwest.Paraguay lies on both banks of the Paraguay River, which runs through the centerof the country from north to south. It is around this great river where pilots battle the weather and the pampa like winds.
Guarani Air has given you a chance to fly in these southern skies to test if you can handle what they dish out to new as well as old pilots. Start flying under the Southern Cross Skies and enjoy many hours way down there!!! 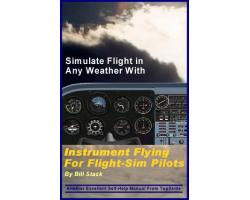 This is yet another mission pack from Rolling Cumulus Software, which apparently is the company name of Gera Godoy Canova when he changed from freeware to payware production. His missions, sadly, have been ripe in colourful briefings but short in quality, and this pack is no exception. The installation instructions are not clear, and you will have to do a lot of searching and fixing to make it work. For instance, several of the missions use a Beech 18. which is of course not an FSX default aircraft so you have to download it, but you are not told from where. Likewise, there is a bunch of weather themes, but they won't be called by the missions unless you yourself make changes in the flight (.FLT) files. There is scenery (which is of course Gera's forte) supplied for eight new airports, but they are sloppily made. Almost all the airports have the runway designation 18/36, but when you get there you will find that they in fact go in totally different directions! The missions are very much alike (save perhaps for #8), and constitute flying from airport A to airport B. You get no clear instructions for this, so in reality these are nothing but Free Flights. There are no rewards. In summary, not worth purchasing.